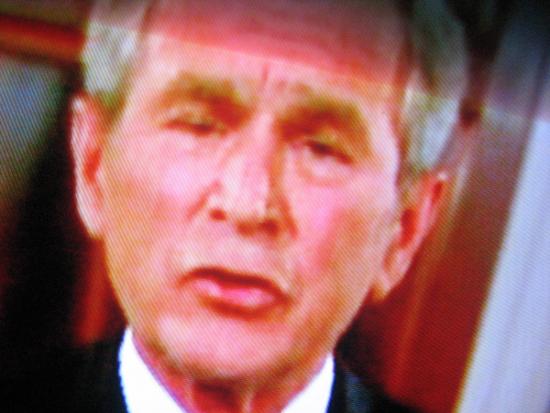 Last night the Republican Convention got underway after being delayed by reign (face the facts Gustav saved the R's from cheap-shotting America with one-two low blows that are Bush and Cheney.)

It was like watching a salute to toxic mold, if toxic mold were the the ghastly shade of pale that seems to be the de rigueur hue of the this assembly.

In an austerity move the GOP didn't hire extras of color to create faux diversity at their convention. There were more black Republicans on MSNBC than there were among the delegates last night. The message was clear: None of your kind here, Obama!

He also implied that we're all in it together concerning taxes. Right, I'm in the same boat as highly profitable corporations that pay no taxes. And you're a statesman, Fred.

As I suggested to Fred when he quit the presidential race, "Just go home to Tennessee and polish your trophy wife,"

In a video salute to George H W Bush, they said with Gulf War I he helped excorsize "the ghosts of Vietnam."

All the ghosts, that is, but the one who's the 2008 GOP candidate for president.

Yeah, he's kept us safe against peace and prosperity.

Then Mrs. Bush introduced W, who spoke via satellite creating a real Big-Bother-is-watching feel to the proceedings, which of course played to his base.

Bush spoke of sitting at his "resolute desk."

What exactly is a resolute desk?

I will continue to be made of wood, no matter what!

Throughout the evening one delegate kept bellowing "Yeah! Yeah!" But it wasn't a Beatles' "Yeah! Yeah!"  it sounded more like the guy had the dry heaves or (appropriately enough) he was a wooly mammoth dying in a tarpit.

There was an incredibly exploitive tribute to a dead Navy Seal Medal of Honor winner, Micahel Monsore, who died by throwing himself on a grenade saving  the lives of two fellow Seals death by sacrificing his own. He didn't jump on that grenade for the Republican Party, he jumped on it for his buddies and the Republicans are absolute slime for implying that his death in a needless war was something that they could then take and use to their advantage.

I turned on FOX for thirty seconds as Neil Cavuto was saying that Republicans are begging McCain to discuss his military service, quoting these people as begging, "Look Senator, ya gotta start talking about it!"

Yeah, take that basket off your naplam.

That whole Country First thing is just too damned subtle.

And filling the convention with more soldiers than the Hollywood Canteen had nothing to do with McCain wanting to remind us of his veteran status.

Bush spoke of how if McCain could survive the Hanoi Hilton, he could stand up to the "angry left"as president. As a leftist I found this to be great news because you know Bush was speaking of his own detractors, which means somewhere around 70 percent of Americans are angry leftists. Right on!

Good luck to him in his attempt to sell Gov Militia to his pals at AIPAC.

When Sarah Palin was mayor of Wasilla, Ak. she received 27 million in earmarks shoveled her way from the man she's supposed to be reforming, indicted Sen. Ted Stevens. So if McCain were already president, she'd have never gained the political footing upon which she now stands.

The backdrop of the stage at the convention is a giant electric flag. No, this Electric Flag was probably what gave that delegate the dry heaves. It was a giant optical illusion and it was making me feel queasy all night.

I'm dosing myself with Dramamine before I watch the America's New Mayor speak tonight.

Speaking of which, McCain backed out of a Larry King interview last night to protest CNN having the temerity to question Sarah Palin's experience to a campaign spokesperson.

And so Whispering John passed up an hour with America's most famous slow-pitch softball twirler. Instead King was left to pose his unchallenging queries to Democratic critics of McCain. Shrewd move, Johnny.

Are you getting the feeling that we'll see a video tribute to Larry Craig before we hear Dick Cheney's name mentioned at this event?

Last night, Chris Matthews' hair looked like he was wearing a toupee...backwards. All Palin has to do tonight is strongly express support and love for her daughter and she will be celebrated to high heaven. This will overshadow the fact that she is a reactionary wingnut who would succeed her aged and feeble running mate, John McCain should the actuarial tables catch up with him. This will be the direct result  of excesses Dennis Perrin complained about. For more, please check my previous post.