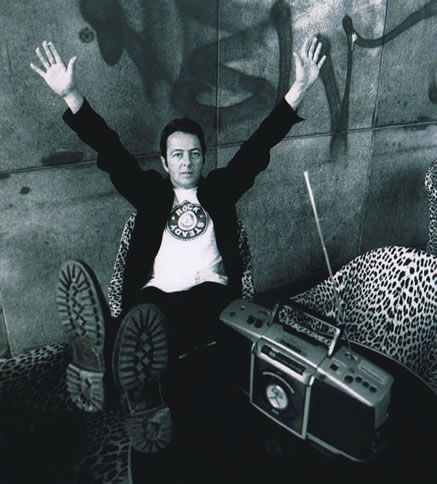 Above: One Joe who will always matter.
Below: Palin being stalked by a Village Person.

Eight years later there are eight days left to complete the shared task of making sure that the Oval Office is once again occupied by a person who has been chosen by the American people rather one who was imposed upon us by the Supremacist Court. The polls and logic confirm the obvious: that choice will be Democratic candidate Barack Obama.

Obama's doomed Republican opponent, John McCain, isn't going down gracefully and why would he? A man who has run a campaign based on the belligerent supposition that there is nothing worse than losing, is bound to make some sickening noise as he has a capital "L" seared into his forehead. His bloodcurdling protestations or "stump speeches" take the form of red-baiting, fear-mongering and character-assassination whenever he brings his dead case before a live microphone.

He has flailed and flip-flopped while proving that he can't lead anything except his own campaign down the path of desperation. Now he faces mutiny from Sarah Palin, his demagogue debutante of a running mate, who is blaming McCain handlers for her own embarrassing performance. Too bad she is misinformed by Joe the Plumber (Polly wanna talking point to go with a fictitious 250k per job!) rather than informed by Joe the Strummer who once said, "When you blame yourself, you learn from it. If you blame someone else, you don't learn nothing, cause hey, it's not your fault, it's his fault, over there." Despite the fact that the more the country gets to know Palin, the more she becomes an acquired distaste, there is talk of how she is trying to limit her personal political damage in next week's inexorable GOP train wreck so that she can ascend to the top of the Republican 2012 ticket. This plan assumes that the Rapture won't arrive immediately after the 2008 race to destroy all earthly things because, as any good Christian will tell you, nothing pisses off Jesus more than wealth-spreading. Should the beneficent Christ spare us immediate eternal damnation for our socialist tendencies, Palin will still be anything but a shoo-in to become the next standard bearer of the Party of the Pachyderm. Judging by all the scandals that seem to be hidden behind so much Neiman-Marcus (or is it Neiman-Marcusmart? I forget) window dressing, she is as likely to be raising funds for her criminal defense as a presidential run by the time the 2012 race gears up in earnest.

In any case, in another eight days Palin will be redistributing her fall fashion collection to indigent Americans too strapped to do anything but accept the soiled Sachs-cloth finery of a dirty politician who strutted the fat-catwalk in outfits that cost just slightly more per copy than a NASA space-walk suit.

The delirious McCain has been reduced to telling us he is a distinct alternative to George "Bring 'em on" Bush. Whispering Johnny then insolently promises to agitate America's enemies by promising "I will test them!" We have seen enough such tests brought on by the boasts of a vain and vapid man. This is why we will respond to this latest swaggering stupidity with a robust national "Shut the fuck up!" on Election Day.

In just eight nights McCain, clearly exhausted from hurling mud with both arms (despite their legendary lack of range of motion,) will break out his jingoistic platitudes one last time -- in this instance to first manipulate us into feeling guilty for not electing a man of his boundless selflessness and patriotism and then to implore us to unify behind his victorious opponent. He'll tell us that the time has come to lay off Joe the Plumber and put aside fears of the Marxist, terrorist-loving, untested bogey man who will be running the country come January 20. This request will be roundly ignored by the ignorant rabble he and the Empress of the North so overstimulated with alarmist rhetoric. Instead of giving the newly elected leader half a chance, this ball of human lint will clump up as one and run out to put "Impeach Obama" bumper stickers on their enormous vehicles.

If Obama's supporters overreact to these crackpots by focusing on a reactionary and dogmatic defense of the new prez, they'll overlook their duty to demand acknowledgment from their man that our nation's path back to economic solvency can only be tread upon if we divest ourselves of the needless burden of what is approaching a trillion-dollar a year military budget. Good Joe Strummer warned us long ago that "The killing clowns, the blood money men are shooting those Washington bullets again."

It would be wonderful if we'd finally learn from our mistakes and hold ourselves and our leaders accountable for the atrociously wasteful insult that is delivered by Washington Bullets. As an old Clash fan I have long known that the USA is not the only country that matters. I'm not counting on a sudden nationwide realization of how we are looked upon as boorish thugs from outside our borders. I am saying that empty pockets open ears -- well at least some ears. Open ears are an opportunity -- particularly at a time when so many people feel passionate about the need for change.