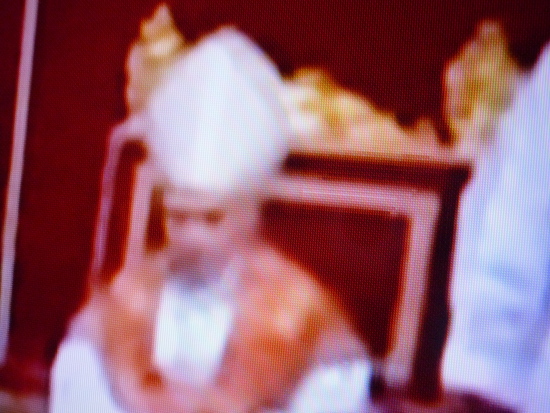 To the Pope and his underlings at the Roman Catholic Church:

Like most of the world, I am outraged by the massive yet still unfolding child abuse scandals and coverups involving both Catholic clergy and lay employees.

Further, I cannot and will not trust a church that sews a secret escape hatch, (known as "mental reservation,") into its clear obligation to the truth. Anyone who knows about "mental reservation" understands that Catholic leadership will say anything it deems necessary to wiggle out of responsibility for church misdeeds. Because of this immoral loophole, you have placed your church beyond credibility. No matter what you say, we must assume you are lying.

Additionally, I refuse to be enslaved by the Roman Catholic Church's absurd, historically shape-shifting and fear-based dogma. Most of these shams can be traced to church greed and/or its attempts to transmogrify human sexuality into something indecent and worthy of self-loathing. This creepy assault on what should be a source of life-affirming inspiration has resulted in the canonical codification of the human rights offense that is misogyny. Continuing its cheesy preoccupation with parishioners' crotches, Catholic clergy has used the pulpit to turn congregations into frothing mobs licensed to hate lesbians, homosexuals, bisexuals and transgendered people for the "offense" of possessing sexual identities. It has fertilized the soul-killing fields with foul sexual crimes, committed by robed rapists against innocent and unoffending children.

This statement is guided only by conscience and a belief that the way to begin to rid humanity of the pox that is your church is to stand up and say, "I am beyond your threats. I do not answer to your hypocritical demand that I remain in respectful silence before an organization that has enriched itself at the expense of the poor while defiling spirituality with centuries of assaults on innocents, committed by those to whom we entrusted our very souls."

No wisdom can guess how many lives your church has destroyed but decent people everywhere are beginning to hold Catholicism accountable for its copious sins. Many have taken the first step by walking out of your ornate edifices, never to return. I hope others join me in the next step by demanding excommunication from your church. Excommunication, you see, is the only act of spiritual value your church can offer to those who understand we must cleanse our souls of the bloody fingerprints of Catholicism if we are ever to live redemptive lives.

I denounce and scoff at your attempts to make us fall in line with your dogma by proclaiming we will never reach paradise if we are excommunicated from your church. Any paradise that allows your church to control its gates is just Hell operating under another name. You hold the keys to nothing but vaults containing the unimaginable bounty you have conned out of your followers and stolen from the rest of humanity. Midas is, and always has been, the Vatican's King of Kings.

Many of your serial sex crime-committng clergy and their accomplices escape earthly justice through diplomatic immunity that allows you to smuggle crime evidence from foreign lands to the Vatican in diplomatic pouches. And how did your church gain status as a nation and therefore eligibility for diplomatic immunity? It was granted to you by Benito Mussolini. Try mentally reserving your way out of that one.

It's my fervent hope that my friends and loved ones, still quaking in your pews, will see that I believe with heart and soul that there is a better and more hopeful path to follow than the one that has led humanity to be duped for centuries by the Catholic criminal cabal. The Roman Catholic Church runs a con that involves tricking people into believing they will face perpetual doom if they break an ancient conspiracy of silence by raising their voices in resistance to all of the evil the church has done and continues to do. Well consider my voice raised. The sole truth available from Roman Catholicism is that your megalomaniacal threats of eternal damnation are no more plausible than your denials of complicity in centuries of crimes against children. If I die five minutes from now, I know my principled opposition to your church will only strengthen my case -- providing Judgment does in fact follow earthly life.

Therefore with full and open disdain for the Roman Catholic Church, I plead guilty to heresy and demand permanent and irrevocable excommunication from your religion.

Yours in abject contempt,

PS- Bill Donahue is a prevaricating apologist for pedophiles and the Catholic League is the equivalent of the empty fort manned by dead soldiers in the novel Beau Geste.