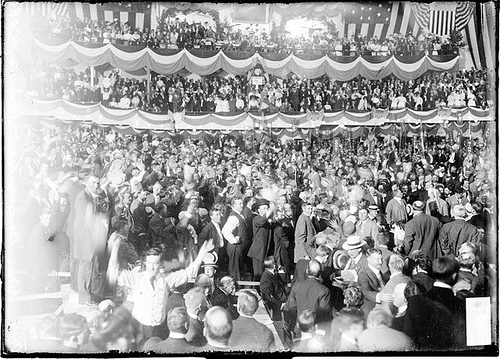 Al Giordano and the Fieldhands have nearly sorted out the fiscal crisis that resulted when Rural Votes' Deb Kozikowski returned only some funds donated for the specific purpose of sending Al to the Democratic Convention in Denver (not to mention funds donated to "keep Al writing.")  These returned moneys were then sent along to the Fund For Authentic Journalism, a good donation destination for shell-shocked crop-sharers who don't

cotton to being hornswoggled by Democratic Party slicks disguised as simple, honest country folk. Many people coughed up additional dough and Al is now virtually assured to be headed Rocky Mountain way.

The dispute now turns to what happens once Al gets to Colorado. Giordano's wildly successful blog The Field hit such a home run in the primaries that it was chosen by the Democratic National Committee to be credentialed for its Denver confab. Giordano has gone to great lengths to show the math that demonstrates just how and why he is the rightful owner of the Field's letters of transit to the Obama coronation. When you consider Al's great and perceptive reporting that early on identified the Obama phenomena and mapped his path to power, you'd think he'd be the last person the Dems would want locked out of the Mile High Hoedown.

Giordano didn't just keep faith with the Obama campaign, he instilled it in tens of thousands of regular visitors to The Field. Many of these visitors became the Fieldhands. As such they've helped spread Obama's message of change and hope far and wide. These good folks got enthused about participatory politics and anted up to send Al to the D convention as their eyes and ears. They can't believe their party will freeze out their representative. Neither can I. Kozikowski, a Democratic National Committee member, uses her insider influence to countermand the collective will of thousands of people to whom The Field means Al Giordano and only Al Giordano. If Kozikowski 's scabby crew of blogging imposters walks into that convention and Giordano doesn't, the Democratic Party will be poisoning The Field's healthy grassroots with old school herbicide. I can't believe that Howard Dean, or for that matter, Barack Obama, would allow such a stupid and unjust thing to happen.

Unless the Dems want to make it clear that party bosses are actively hostile towards their standard bearer's bottom-up democratic approach to this campaign, they had better get Al credentialed and credentialed quickly. Until they do, the Whole WorldWide Web is watching.

UPDATE, upon sleeping on it: Then again, it's a big party, planning a big convention and it probably hasn't gotten around to noticing what Rural Votes has and/or hasn't been doing. As Giordano has demonstrated, it's not as if anyone is going near the RV website now that the Field is nestled among greener pastures. So I guess the trick here is to make sure the Dem front office is apprised of what has happened and is informed what democratic Democrats demand be done to ameliorate this situation.

In other updates... Zorro Tolerance aka/ Randy Credico has hit the New York Times blog.