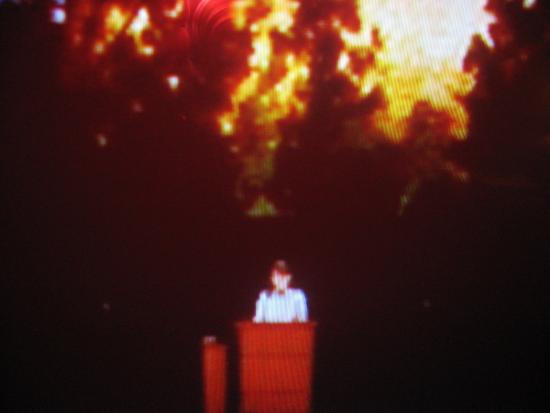 The problem with trendy words is they come out of almost nowhere, get run into the ground and are rendered all but completely unserviceable when there is a legitimate call for them.

Such is the case with "snark." It's absolutely apt when discussing Sarah Palin and her speech last night at the Republican Convention. Despite how rapidly "snark" has grown threadbare, it's impossible to avoid using at this moment. Snark rhymes with "shark" and that was Palin's nickname coming into the speech. Now her sobriquet is twice as long. The Snark Shark energized the condescending portion of the base of the Republican Party last night but maybe not the parts of the base some thought she'd inspire. The speech's absolute lack of humility and generosity spoke directly to a lot of miserable old men who live in places where even the possibility of a black man becoming president is turned away at the guard shack. They live where community organizing is unnecessary unless the groundkeepers have let the fairway grow a bit too shaggy. How much Palin's primetime sneer appealed to the evangelical community is another question. There was nothing blessed or meek in her remarks and her only real mentions of religion were used to kneecap her opponents. What has Governor Palin's faith done for her other than elevate her to a place where she can walk on the stage at a political convention and say, "Blessed are the power elite!" She didn't discuss the beauty and majesty of Alaska, she belittled the places where tens of millions of Americans live. She ran a town that was bolstered by almost $30 million in pork barrel graft from Sleazy Ted Stevens but she disparaged the people who reside in places where fundraisers have to be done to buy rudimentary items like textbooks. And she's going to ride into office by dissing the people who organize the underprivileged? Well maybe.

Palin was also supposed to win over a lot of women who supported Hillary Clinton. Many of these people are mothers. Mothers say things like, "If you can't say something nice, don't say anything at all." This would have limited Palin to discussing her own family and John McCain's shoulders (Jesus, do they have a sign in the wings at that convention that reminds every speaker to mention McCain's shoulders, or what?)

On a night when Republicans did everything but belittle people who can spell for being elitist, the R's also made some rather remarkable promises. Speaking of McCain, Mitt Romney proclaimed "radical violent Islam is evil, and he will defeat it!" Yeah, right after you reopen all those auto plants in Michigan, Mitt.

Palin's expertise is supposed to concern energy. Speaking about this crucial issue, she expressed a willingness to clear-cut the environment for quick fixes. Pitifully, this self-proclaimed conservative and energy expert never even mentioned conservation, which is the first and fastest way to confront this challenge.

Last night we saw Tonya Harding with a speechwriter. She offered almost nothing of substance. She's positive we should be paranoid. She mocked constitutional rights. Well screw you, Nananook of the Nazis. The stuff about putting the governor's jet on E-Bay was cute but other than that she did what reactionaries always accused hippies of doing -- she tore down but she didn't build up. She did something that no hippie was ever accused of doing, she fortified the luxury bunker where the rich and powerful hide. The creepy thing is that she did it in the guise of an American every woman. She sold herself as a great administrator, even though she couldn't manage to keep a carwash open in the the muddiest state in the union. . She is boldly trying to do nationally what she did in Alaska -- come in as a reformer without mentioning that the reason there is a need for reform is because of people like her. We have just suffered through eight years of a self-proclaimed western reformer governor who as president has privatized our government, run the Constitution and Bill of Rights through a parchment shredder, started two disastrous wars, raped the environment, and bankrupted the economy. How are we supposed to reform this? By bringing in two people the last "reformer" has enthusiastically endorsed to replace him and his malicious vice-president. Jesus, America, they're calling us stupid. Maybe the suckers in Alaska buy the idea that the scumbags can replace themselves with themselves and call it reform but we'll see about it in the lower 49.

This is not to say they won't get away with it. My pal John Joslin points out that Palin only needs to pull off this act for the next 60 days. She also serves an important function with all her snarkiness: she distracts us from the doddering McCain who can stay backstage and get a few extra huffs out of the oxygen mask while she creates the diversion.

So she only has to hold out from Sept. 4 to Nov. 4 because her act is like a McMansion that was erected quickly and of shoddy material. It will soon fall apart and the sun it blotted out will return but for now, it sprung out of nowhere and has a hell of a facade. For now, if reporters dig up facts that contradict her assertions, she'll sell herself as a martyr in the great struggle against the Marxist media. If her qualifications are questioned, she'll tell middle America that they are the ones who should be insulted.

Her small town hokum is particularly egregious but it still could be her undoing. I grew up in a village of 3,000 and not a single one of the glad-handing jokers who served as its mayor would have a chance in hell as second-in-command of the USA. Why? Because they were only qualified to stay in power because they treated all things from the outside as dangerous, as threats. They used an "us against the world" mentality as their basis of rule. They're coming to ruin our way of life! Of course as the rest of the world came to our pretty little town and bought it, our fearless leaders quickly sold a beautiful lake down the river to developers. Sarah Palin is exactly like those clowns. Hell, she is one of those clowns. (Then again, maybe this makes her perfect for Washington.) Because of her, little asshole mayors all over the country are that much more full of themselves. Considering the puniness of these tiny, turfy twits, this could really backfire on Palin. Small-town Americans put up with lame local officials because they hate dealing with the petty nonsense that is the small-time pol's stock in trade. If Sarah Palin emboldens these Babbits to start swaggering in public rather than to just continue to lurk in the town hall basement, skimming nickels from the parking meter haul, it could remind us why we don't want the likes of the Snark Shark a rather faint heartbeat away from the presidency.

It's time for Barack Obama to continue exactly what he did to get where he is today. He needs to step up what was roundly mocked last night. He needs to community organize. Just as Palin wants to turn the entire nation into a paranoid and intolerant small town, Obama must continue his work to turn American voters into a very large, organized community. The R's tipped their strategy last night - they think community organizing is an easy thing to pooh-pooh. But in the back room the reason for the attack is different -- these people fear an effectively organized electorate. This attack was first unveiled by crooked cross-dresser Rudy Giuliani, who asked if anyone even knew what a community organizer does. Of course he knows exactly what a community organizer does - - a community organizer makes life miserable for racist, fascist mayors like Giuliani. A community organizer helps create collective power by motivating large numbers of downtrodden people to hope for a better day. There are more than enough downtrodden people in this country to organize and so they can tip the scales of power. If Barack Obama can continue to inspire these folks to get politically active, they'll create a roar so loud that it will be heard even behind the walls of the most fortified gated community.