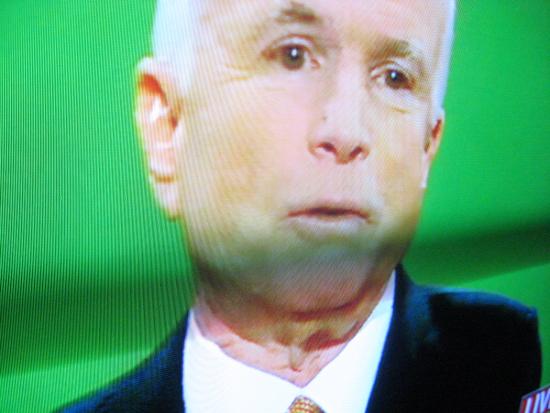 After calling Monday night's RNC opening ceremonies on account of shame, it was obvious that John McCain was about to drop off the Bush-Cheney team at the next intersection with an open sewer grate. Last night, in accepting the Republican nomination for president, McCain jettisoned, by calling for the end to "partisan rancor." That means everyone. After all, if McCain can be big enough to look past recent American political ugliness,  he canexpect nothing less of his political opponents. After all, the Hapless Warrior isn't really a Republican, he's just a patriot. But not just any patriot. McCain doesn't just love his country, last night he proclaimed he's in love with the USA. Psychosexual overtones be damned, this leader isn't afraid to express his attraction to majestic purple mountains and fruited plains. If you don't like it, you're just part of that tax-loving America-comes-second crowd.

So get with it, the old man says "no rancor!" and he means it. It would be downright unpatriotic to mull over the failed policies and unmitigated sleaze that have accelerated the decline of the land John McCain loves more than anyone who wouldn't vote for him. He walked the walker last night. He owned up to slight Republican difficulties in between his live reading of his autobiography that filled in those blank spots left after three days of RNC bio vids of McCain. He told us that some Republicans had succumbed to corruption but promised "change is coming." Well that's a relief! How, you might ask, will McCain facilitate this change? By extending his hand to former enemies.

He has already proven that he can do this. Why else would so many Bush insiders (who hatcheted him in the 2000 R primaries) either be working for him or pipelining strategy to him? Karl Rove, Ken Mehlman, and ad and media strategists Mark McKinnon, Russ Schriefer, Stuart Stevens and Fred Davis have all greased up McCain's campaign with their fingerprints. And let's not forget Bush's 2004 attack dog, Steve Schmidt, who is now chained to the front seat of the Straight Talk Express. Talk about forgiving and forgetting! This McCain is a saint and a patriot!

This means the hucksters, who crammed George W. Bush down our throats as a compassionate conservative whose foreign policy would be humble and who would never engage in nation building, are back. This time they're telling us that their candidate is the miracle cure for the ethical, fiscal and spiritual plague they visited upon us in the evil-as-he-is-incompetent George W. Bush and his soulless ghoul of a vice-president, Dick Cheney. So the question is rather simple, America -- are we really going to let these fuckers piss in our faces again? Are we really going to let them sell us this Keating Five alum as a reformer, this impatient hothead as a warm credit-sharer, this ultra-hawk as the only viable hope for peace? Maybe. This is after all America, where anything can happen.

After Sarah Palin's high octane yet empty-caloried speech Wednesday, it's likely a large audience tuned in last night to see what all the excitement was about. By that point, the excitement was about 24 hours ago and not soon to return. Thursday's RNC offered a night of endless drivel from several Gluttonous Old Party luminaries, including: Former Fatherland Security Commandante Tom Rigid, who actually uttered the phrase "over 230 plus years ago." He was bound to appear sometime around when the GOP reeled out their favorite nostalgic propaganda tool: 9/11 highlights.

Sen. Linseed Graham, McCain's buttboy de camp, declared victory is on the way in Iraq, just as the R's crack AV team projected a shot of a very large military cemetery behind him. Nice touch!

Former Washington Redskins coach Joe Gibbs provided a treat for the evangelicals by babbling in tongues. And Cindy McCain, who believes in throwing an occasional pearl into the poor box, provided the easiest of acts for her hubby to follow.

After one more video salute to remind us that he served in the military, McCain came out and gave the speech that would not end. Ever. I guess he figured that since he was incapable of delivering a barn burner, he would instead mention every piece of straw in the hayloft. Things grew pretty hazy for the next couple of hours but when McCain began to speak reluctantly of his POW past, for the 1800th time since January, you knew that he was close to wrapping this thing up so he could get back to his family and a good, home-cooked American meal. It wasn't too long before he was yammering "Stand up, stand up, stand up, and fight!" This caused several members of the Texas delegation to nearly kill one another, but mostly instigated a large uproar of appreciative clapping, hooting and howling. Then McCain, the guy who is supposed be ready for anything, didn't notice that the crowd interrupted him and so he plodded ahead with his Rockne rhetoric even though his frail voice was all but drowned out by the roused reactionary rabble. He kept reading the script during an inaudibly clumsy crescendo to his boilerplate special of a speech. McCain's Bambi-meets-the-teleprompter routine provided a silly counterpoint to his jingoistic surety. I haven't witnessed such a moment in American politics since GHW Bush's final campaign rally in Houston in 1992 when someone mistakenly cued the marching band that then broke into Twist & Shout, which was what Poppy was forced to do during the last few lines of his swan song.

The night was as genuine as the fake "home-made" signs that pockmarked the convention. (OK, either they were fake or every Republican just happened to buy the same watercolor markers that they then used to create remarkably uniform printing and messages.) The proceedings wound down with one last forced march of the spouses and kids onto a stage that was quickly becoming a de facto set for the Family Feud. Survey says: Hopelessly contrived! Balloons and confetti dropped. Music of incomparable dildocity blared and then it was over. Sarah Palin was rushed off to isolation lest anyone ask her anything improper about her background, qualifications or knowledge of the world she wants to rule. McCain, up well past his bedtime, headed off for some much needed rest so that he can resume his deranged social studies teacher act today. And we are left to fret over whether or not this duo, with the help of the con artists who brought us George W. Bush, have in fact proven that we will get fooled again.