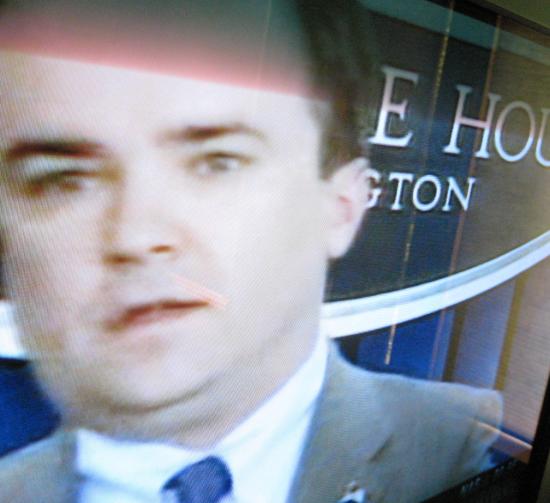 You can trust this man when he says he lied.


He [Scott McClellan] had all the credibility of a greasy, sweaty John Wayne Gacy saying, "Smell? What smell?"
Barry Crimmins - The Boston Phoenix -July 28, 2006

Scott McClellan is prepared for this moment. For years this clammy little man went out and humiliated himself by demonstrating an inability to placate the lapdog White House Press Corps. This experience will be invaluable as he makes the media rounds with his book, What Happened: Inside the Bush White House and Washington's Culture of Deception.

I'd have called it The Inside Dope on the Dope Inside but that's just me.

The book is classic McClellan. Even when allowing mistakes were made, he dilutes the blame. It's not really anyone's fault, it's the White House that's liable. And not even the White House should be held accountable because after all, it's in Washington. It's the same tactic John McCain used when he blamed the "political climate" for forcing him to take all that cash in the S&L scandal.

Anyway, it speaks well of George W. Bush (THE dope inside), that he hired McClellan in the first place. Bush is no elitist -- he figures if he can be president then other inept and incapable people also deserve chances to do jobs they should never be near. Most chief executives would have been a bit more careful about who they sent out to explain away:

a senseless and illegal war and the massive disregard for human rights that accompanied it...

a male prostitute in drag as a journalist and planted in the White House Press Corps as the administration's go-to softball tosser...

a criminally inept and clearly racist response to a horrendous natural disaster...

But not W!  He picked up the proverbial bag, handed it to McClellan and said, "Here ya go, Scotty Boy, now get out there and perspire!"

And perspire he did, shellacked in sweat and squirming like he had a load in his pants as he clumsily ducked questions by aburdly suggesting they weren't in the national interest. The American people don't want us wasting our time talking about extraordinary rendition, torture, spying on anyone suspicious enough to have telephone service, or our war-maimed and dead, when instead we could be talking about how we can get the Social Security trust fund privatized. And this president happens to agree with them!

In a way, the McClellan hire was inspired. On those rare occasions when Bush held a press conference, Scotty provided an extremely easy act to follow. Through his press secretary the president reminded us that you don't have to be a good liar to work for George W. Bush -- you just have to be a liar. Even though ethics are never involved in anything this administration does, there are still morals to its stories. The story of Bush's incredibly un-credible media representative is inspirational. Day after day Scotty Mack walked out to that podium burdened by a few long tons of hooey and found the strength to speak loudly enough to be heard over the constant whir of the White House parchment shredders. In the process, he set a brave example for shiny, pink men everywhere.

Mr. McClellan should not be excoriated for this book, he should be praised. At long last he does have some shame. He has admitted that he spread a stinking pack of lies -- it's just that he didn't realize they were lies at the time. He doesn't think the American people are concerned about when he discovered what a dupe he'd become, he just thinks they want him to confirm what they already knew the first time they saw him fidgeting in front of the cameras.

"What Happened" is a pretty good name for this book because it's what you ask when you come out of a coma. Everyone else knows what happened and so anyone can answer your question. What happened, Mr McClellan, was eight years ago in Florida many, many people were cheated out of having their votes counted and because of it, very bad men took control of our government....

Response to the book has been predictable -- everyone hates it --especially Bush/Cheney dead-enders such as Trent Duffy.  Duffy, a former member of McClellan's staff, said, "Here's a man who owes his whole career to George W. Bush, and here he's stabbing him in the back and no one knows why. He appears to be dancing on his political grave for cash."

Mr. Duffy was apparently too busy averting his gaze to notice McClellan making like he had St Vitus' ants in his pants in the political boneyard that was the White House briefing room. And why did McClellan write this book? Because there aren't a lot of opportunities for discredited apologists for the worst president in history. He was down to two options: book royalties or continuing collecting the hush money. Why did McClellan wait until now to come clean? Well maybe he understands there's still something at stake. It's too late for him to bear witness against crimes as they were being committed but that doesn't mean that this book won't be seen as a signal to international jurists in The Hague that he would be a very cooperative witness for the prosecution when the war crimes trials commence. And if that sounds far-fetched, well maybe McClellan knows things are even worse than he's acknowledged. Maybe he figures no one is going to be able to hide all the skeletons Bush and Cheney have crammed into the closets of 1600 Pennsylvania Avenue for much longer.

Along with Mr. Duffy, I am a bit concerned about the $27.95  cover price of What Happened. The American people have already paid far too much for the lies disseminated by Bush's Designated Pinocchio. If McClellan were truly reformed, he'd understand that he owes us the truth.