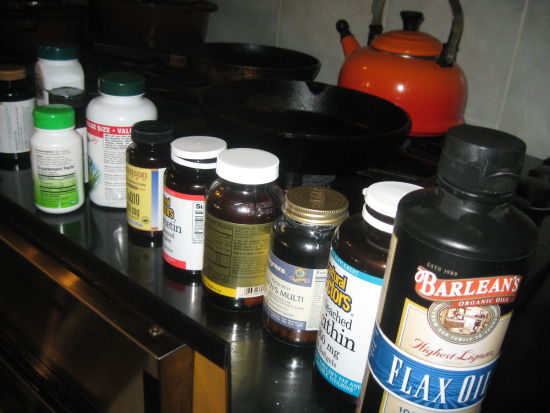 NOTE: I moved this off the feature page because I thought it was too long. Then I heard from a doctor in the comments section and realized this needs to be as available as possible-- BC)

A week ago today, life was closing in on me.

I was running out of the herbs, vitamins and hippie concoctions that have been keeping me alive for the past 15 years.

I felt too poorly to make more than a half-hearted swipe at any new projects.

I hadn't written much for this blog for months and months.

I'd abandoned hope of ever getting proper health care.

I was depressed over the future of Lettie and Lu the Dogs, who would face drastic and startling change were I to suddenly and permanently depart.

Come to think of it, maybe life wasn't closing in so much as it was closing out. I was fixin' to die. And that's no way to live.

I put one foot in front of the other and made it to the appointment. Ever vigilant, it didn't take long for the men and women of the health rackets to brand me with a scarlet "C" to indicate that I had a perilous preexisting illness. That illness, Hepatitis-C,  truly alarmed these otherwise unflappable professionals. They sprung into action and began watching and treating me as if I were the guy who had stolen their car stereo and cassettes back in '87. Their disdain for me could not be concealed. Some of those Kenny Loggins tapes were irreplaceable.

Despite the fact that these corporate functionaries in lab coats treated me as if I were a junkie (and like I always say, not even junkies should be treated like junkies), their treatment of me resulted in a major medical breakthrough. It restored my voice.

It couldn't have come at a better time because I used it to speak up and walk away when I realized I was the one about to be robbed. The colonoscopy I was to have had was to be paid for by a government agency. But once the doctor ordered a batch of blood tests that weren't covered by the state, I was left to the mercy of the merciless - the for-profit health racket. Before I could get those tests, I was directed to apply for assistance - under duress and in full view and earshot of several other people who had no business learning of my private health and financial circumstances. Those folks had their own troubles and didn't need to know about mine. Had I not spoken up in protest, and instead complied with this humiliation and gotten the tests, it's likely I'd have returned home to learn that I had either been granted a minuscule discount or that I had been flatly rejected for any aid at all. Then the bills would come, followed by the phone calls from the virtual leg-breakers hospitals happily send after anyone thirty seconds late with a remittance. These leg-breakers demand payment of bills ciphered by people who believe a fair price for a Tylenol is $11.50. (The extra-strentghs are $15.80 but if you break it down, they're a better deal.)

Legalized medical larceny doesn't just victimize the uninsured. It also savages the insured with whopping premiums, large co-pays, ridiculous claim denials and "billing errors" that never, ever break the consumer's way. To fight the health insurance racketeers requires an ability to spend a few generations on the phone, listening to horrid music, only interrupted by a robot telling you how important your call is to its software licensee. Such attempts to realize healthcare consumer justice require the faith and patience of an old Catholic lady who doesn't realize that kneeling and praying the rosary doesn't cure arthritis, it causes it.

We need to speak to each other and not spend our lives on hold per the instruction of a nonhuman representative of an inhuman corporation. Humans are such better company.

This post would run 12,000 words if I thanked all who've shown kindness. In my doldrums, I'd forgotten the power of protest and the possibilities of compassion. Thanks for reminding me. I'm amazed at all you've done on my part already.

Several of you are attempting to find ways to get me health care. This includes an offer of pro bono care for any basic GP stuff I need from a doctor not too awfully far from here. His wife, a nurse, wrote to denounce the system and then offer to help me work around it. Amazing.

An eminent attorney is going to fight for my right to Medicaid as well as attempt to get me into a drug trial for Hep-C patients. So skip lawyer jokes around me unless the punchlines concern corporate barristers.

Paul Krassner and James Wolcott slathered the internet with my two healthcare posts and their audiences came running with an array of kind and wise responses.

Anne Feeney, the great musical advocate for workers everywhere who spent much of last year touring in support of single-payer, chimed in from Sweden with a generous offering and a true tale of how well she was treated in an emergency room over there. Praise Odin!

Many wrote to ask how they could help. I requested they join the fight for single-payer care. Most already had. I then suggested that if they really could afford it, small gift certificates from Amazon would help me keep current in herbs, supplements and various other essentials (such as the expensive pills that really help Lettie the Dog's tender hips). I've now learned that some of you have a much different idea of what's "small" than I do. Some responded with anonymous donations. Thanks unnamed benefactors! Some sent donations but no email address where I could send thanks. (Thanks Joy!)  Several others allowed me the pleasure of personally thanking them for their generosity. Thanks again!

My life has been depressurized. I'd been scrimping on my "meds" but now full doses of everything are the rule of the day thanks to the largess of many people. The flow of assistance has begun dramatically. I was about to use up some dicey milk thistle I'd bought at a Dollar Store but then a package containing premium thistle came moments before the subpar supplement would have been swallowed. It wasn;t due for another five days. Yesterday I finished off the Yellow Dock. First thing today the UPS man arrived with Yellow Dock in hand. It wasn't due until at least Thursday or Friday. Karma, baby, karma!

Slews of messages of support and solidarity are still flowing in. Some from folks in circumstances similar to my own. Some from people who had lost loved ones due to criminal denial of the human right of health care. One person told me of how he was considering leaving his family because he is very sick. You see, in this country we take away the homes of the sick to pay higher dividends to stockholders. USA! USA!

The more I hear the more I wanna holler. The more I holler, the better I feel. I'm sure not about to roll over and die. My renewal started when I spoke up but continued because of you. I can't believe how many people are on my side. And in my boat.

Something I wrote a few years ago keeps coming back to me: The corporate health care racketeers know that sick people often are too weak to do anything but take "NO" for an answer. So "NO" is where they start. "NO" would have worked on me a week ago. I now consider it unacceptable. I have a treatable disease and I will get treatment, goddamnit!

Please holler with me. If we remain silent then we're going down and going down hard. If we speak up, the worst case scenario is that we bite the dust cursing the forces that drove us into it. It beats going quietly.

One of the people my outburst drew out was Ed Robinson, a fellow rabble-rouser from the Boston days. He wrote and sent me a lovely gift Saturday morning. I wrote back to thank him. He replied that he had been around for a lot of my work in opposition to Reagan's Death Squad Diplomacy and George Sr.'s Gulf War I. He said he had a tape of a speech I'd given in 1990 and that if found it, he'd post it on YouTube and send me the link. A few hours later the link arrived. Thanks, Ed!

The video is of a much younger me. For the health record, I lost over a hundred pounds in the months following  this rally -- perhaps from giving speeches like this one - but I suspect vegetarianism had something to do with it. So here's my old self speaking up. My new self promises to do the same so long as I have air in my lungs and milk thistle on the shelf.