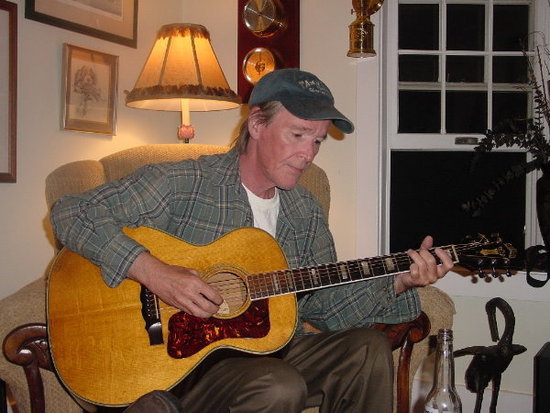 I've not yet regained my breath since receiving the devastating news of my dear friend Bill Morrissey's death.

The end came for the folksinger, novelist and world-class romantic when he was alone on the road in Georgia over the weekend. I'm sure he died with his guitar lying in its open case on his motel room's other bed, a few boxes of his CD's deposited onto the floor of an inadequate, doorless motel closet, his neatly packed suitcase flipped open on an aluminum stand with nylon straps, a few scribbled notes on a pad on the nightstand, a well-dented bottle of Jack Daniels next to those final thoughts and an ashtray containing the remains of the last few mentholated cigarettes he ever smoked in his remarkable life. It was a life in which he lived most every emotion that he employed in hundreds of songs and a few novels that described the human condition in detail that would make an Egyptian crypt-carver envious.

I can estimate the scene of Bill's death because I spent a lot of time visiting it. Often I was staying just a few crypts down the hall. After a show, and an hour or two of meeting and greeting his devoted audience, we'd grab a few (OK, several) beers and head back to wherever Bill was hanging his hat. We'd talk and laugh a lot. A measurable portion of our discussions were in badly lip-synched gladiator movie speech. More than once Bill recognized me in the audience and acknowledged my presence with a ringside gladiator-talk callout.

Bill- Look what the harpies have dragged in, my old friend Satirus.

Barry- Hail, Hercules! Much urine has flowed through the viaduct since I have last heard you serenade the gods with your lute!

Bill- Pull up a styrofoam boulder and I will appease the mighty Zeus for you.

Barry- May a panoply of gods support you in your quest!

And then we'd loose completely out of synch belly laughs that finally allowed the audience to catch up with us.

Next Bill would break into one of a few dozen of his songs he knew I loved. But before he'd play Long Gone or Summer Night or She's That Kind of Mystery or Inside or 23rd Street or whatever, he'd say, "this one is for you, my friend, Hercules" (we were both Hercules as often as not) The intro was also out of synch and inevitably got the biggest laugh of the bit, his comic timing as precise as his lyrics were articulate.

The call I had long dreaded (because he drank and smoked too much and barely ate anything and suffered from paralyzing depression) came from Bill's ex-wife and manager Ellen Karas. They had such an amicable divorce that it provided Bill with more emotional stability than most people receive from a good marriage. Perhaps Bill's curse was that he ran on yearning and thrived on pining. He was always falling in love and it rarely worked out. On the checkerboard of his love life, Ellen provided one of the few moments when he was kinged.

As typical of Ellen, she wanted to make sure I got the news from her and not Facebook or something. She was devastated but thinking first of others. I was in shock and unemotional. She asked my assistance in contacting as many people as possible so as to shield them from an un-padded sucker punch to the soul. We hung up and got to work, sparing a few people, a bit, before the Facebook dam broke late Saturday night. I broke the news to Cliff Eberhart, a great folksinger in his own right, who was one of dozens of artists Bill helped get established in the craft he'd mastered. Cliff, who was instantly emotional, sliced to the pith, "You need say nothing more than 'He recorded Standing Eight.'" With the precision of a great lyricist, Cliff had acknowledged Bill's myriad accomplishments while focusing in on the fact that he had made a near-perfect album. Four stars in Rolling Stone and a good twenty years in heavy rotation on my playlist.

After that it was very late, just the hour when Bill and I would kill time discussing life, the road, the biz and women. He would punctuate these rambles with songs old and new and any request I'd throw at him.

After speaking with Cliff, I went out on the porch and fired up the iPod dock, swiveled the artist dial to "Bill Morrissey," clicked a few times and selected "all" when asked which songs I wanted to hear. Just like that I was alone with Bill's thoughts. The beautiful wooden porch added acoustic profundity to my friend's craggy, achingly perfect voice. It was just the kind of summer night he so loved. The crickets, frogs and nightbirds fell silent so they, too, could listen. The heat of several days finally lifted as a merciful breeze accompanied his virtuoso guitar playing, jazz-influenced arrangements and most of all, his countless re-descriptions of the yearning for love and longing of loneliness, made that much more difficult by the cruel economic realities regular folks face.

I lost track of how many motels he mentioned in a few dozen songs but they were brought up nearly as often as the real-life strugglers who peopled the little worlds he so painstakingly created. Finally, I made my only statement of those wee hours, "Farewell, Hercules...."

And then the tears came and came some more.