If you love your freedom, assail a hack Tuesday, October 7, 2008 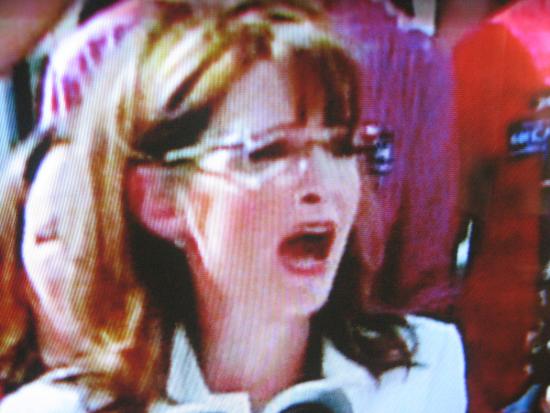 Bless your heart, sir, my son is over in Eye-Rack, fighting for your right to protest. -- Sarah Palin, to a purported heckler at a rally yesterday.

There's something doubly evil about a self-avowed Christian who prefaces almost every uncharitable remark she makes with a disingenuous "Bless your heart!" In any case, I say this without even the slightest amount of support or emboldening from the US military-- fuck you and your jingoistic blather, Palin. How's that for freedom?

I've dealt with the intellectually bereft assertion that there is a direct relation between domestic freedom and this country's militant imperialism many times so please consider this a brief general election refresher tirade.

We were told years ago that our freedom was on the line in Vietnam. The USA then LOST the Vietnam War but we remained free. To this very day, Charlie has made no forays into my neighborhood -- unless of course you count the NIKE Store that he fills with manufactured goods in exchange for subhuman wages.

If I heart my freedom, thank a vet? Well, maybe a WWII vet but after that, you've got to be kidding me. The military/police state that is America in 2008 is overrun by people who think they have a perfect right to crack protesters in the head, restrict speech and impose ridiculous limitations upon civil liberties-- all in the name of freedom! Habeas corpus is a memory, constitutional safeguards against consolidation of power by the executive branch have been bound and gagged in Dick Cheney's inner office, the Fourth Amendment has been extraordinarily renditioned to parts unknown and the federal government is the silent partner in everyone's cell phone "friends and family" plan. For this I'm supposed to thank some poor sap, stupid enough to join a military with a draft-dodging rich boy serving as its commander in chief? Please. The war in Iraq (and allegedly on terrorism) has been used to curtail my freedoms. Loose lips sink bullshit at times of unnecessary war and we can't have that, can we?

To deal specifically with Palin's putdown of the person at the rally:

1- It's even money the 'heckler' was a plant. Has anyone spoken to him since the rally? Where is he? Gitmo?

2- Considering all the people who have been arrested over the past several years for protesting (or wearing tee-shirts or not being card-carrying Republicans or whatever) at mainstream American political gatherings (both R & D), Palin is relying upon American ignorance with her talk of "fighting for freedom." She has no use for protesters except when  she can put them down by exploiting her own son.

3- With her outburst yesterday, Governor Palin only underscored the fact that her son is in Iraq as a potential human sacrifice to her political ambition. Like her daughter she is forcing into marriage, he has been shoved by his stupid family into an arrangement that may well destroy his life because it is what is best for his mother's cynical aspirations. (At least Biden's son is also promoting his own political ambitions.) Young Palin is also serving as a Hessian in the cause of corporate imperialism. Sadly, that pretty much sums up what this poor dupe is doing in Iraq. To repeat, he doesn't have a goddamned thing to do with my freedom to call Palin on her bumper sticker jingoism. His presence in Iraq doesn't make it safe for me to speak out against reactionary slime like his mother. The First Amendment to the Constitution is what guarantees my right to accurately label political bottom-feeders like Sarah Palin.

Patriotism is the last refuge of a scoundrel and Palin opens with it. Then the freeze-dried fascist sinks even lower by terrorist-baiting her political opponents. She is the worst America has to offer.

So if you love your freedom, thank a protester for confronting penny-ante political thugs like Sarah Palin.