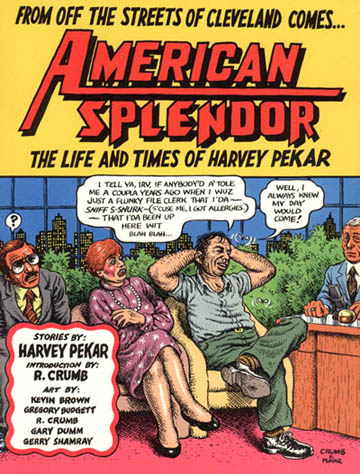 Harvey was 70 years old. He was also a brilliant chronicler of our times; a writer whose innovative ability to turn out unvarnished classics was unrivaled; a renowned jazz and literary critic; a hoarder before hoarding was a disorder; a TV and movie personality; and an encourager of his fellow workers -- whether they labored beside him at the Veteran's Administration Hospital or toiled with pen or keyboard or brush or, for that matter, shovel. Harvey was the hardest worker I ever knew. He never stopped looking for outlets for his efforts. He earned everything he ever had fair and square and was quick to share opportunities and editors' phone numbers with those he felt were at least nearly as honorable as he.

Harvey Pekar was as politically pure a fellow as I've ever known -- his pithy insights  were real timesavers. One day, as we watched a lightweight Dem tiptoe around a crucial matter at a political gathering, Harvey looked at me and declared, "bullshit coward!" and we were on to more important things. As soon as we finished chortling.

Harvey was a family man whose home life was as unique a love story as could ever be told. That tale co-starred Joyce, his match in life and collaborator in negotiating a world that was never even slightly prepared for them. And then, not too long after they survived their cancer year, came Danielle, whose addition to the family was an act of love and faith by three people that resulted in a another chapter that truly deserved to be filed under the title "American Splendor."

I first met Harvey and Joyce in Cleveland on Thanksgiving Eve of 1990 (or was it '91?) when I was touring with Billy Bragg and the Disposable Heroes of Hiphoprisy. That night was the first time Harvey saw me perform. He introduced himself and deemed me "a good cat." Since I was already a disciple of his, I was humbled to have been glossed in such a manner by His Hepness. He praised me for my honesty and for espousing views that were grittier than those of many other political humorists. He also accurately predicted commercial doom for me. He then smiled that crooked smile of his, glanced at me sideways and said, "So ya got a badge a honor!"

Harvey had a deep historical knowledge of political satire (and almost everything else) and it was on this night, while speaking with him, that he provoked me to articulate my task as an artist: play to the ages and not the age. Because, I reasoned, if I held to this plan, someday some future Harvey Pekar might stop and spend a few moments with me rather than cast me aside as just another panderer to a long-passed era. So I owe Harvey for that and much more.

As coincidence would have it, I moved to Cleveland a few years after that in what I would later describe as "a performance art piece that not even I got." (In fact there was a very good reason for my move and her name was, and is, Karen Crist) Throughout my stay, Harvey Pekar and Joyce Brabner were there and were great friends to us. They were never afraid to shame people into adding our names to a guest list or my name to a bill. We slunk around the perimeter of many a hipster and/or charity event and had a lot of laughs doing so. The Pekar-Brabners always made it to my shows in town. In Cleveland, that gave me more than enough gravitas with which to operate.

Harvey and Joyce (and yes, even Danielle) are now legendary figures. Much of that legend comes from their failure to comply with many of society's shallow and silly niceties. That legend is not built on myth. Their quirkiness was an honest reaction to a world of bullshit. Harvey and Joyce saw no need to be polite to hypocrites, liars and lightweights. Their approach set a tremendous example for the rest of us. They eschewed rituals that would make them appear to be genuflecting before phony altars. They just didn't make a big deal of it. Instead, they swept in, behaved as they saw fit and always left something behind that was very special for those who bothered to notice.

After Karen and I left Cleveland, I stayed in touch with Harvey and Joyce for a few years but then the film American Splendor came out. It was (of course) a critical smash. I started seeing Harvey, Joyce and Danielle in news clips from places like Cannes and Sundance. I began to feel that I was on the wrong side of the velvet rope and should not keep bugging them. So I caved to convention and lost touch. Harvey would have been ashamed of me! But I thought of them often and followed their continued adventures through mutual friends and the media. Having recently completed a screenplay about a slice of my own splendor, I was going to call Harvey and Joyce to seek their wise counsel. Alas! Now the call will be of the condolence variety. I know when Joyce answers, it will seem like we'd just spoken yesterday. We should have.

If you want to honor Harvey, lay down a few of your hard-earned dollars to buy some of his work. You will not only be paying homage to a great artist (and making a good investment), you will be making sure that his wonderful family, Joyce and Danielle, continue to benefit from the splendid efforts of a worker who never stopped working.

POSTSCRIPT: As I sat and listened to some jazz and thought of Harvey, I realized that I'd failed to comment on the poignancy of losing this true working class hero at a time when workers' blood is what is being squeezed out of our economy so that wealth can be evermore concentrated. You can bet Harvey Pekar didn't die unaware of this economic obscenity.