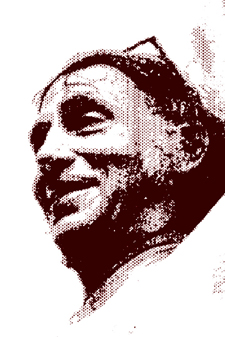 Today would be the late William Kunstler's 89th birthday. He was a brilliant, passionate and courageous battler for justice, a thorn in the side of oppression and a generous and patient friend. He had a wonderful sense of humor and an effervescent fervor for life. We miss and love you, Bill.

The William Moses Kunstler Fund for Racial Justice continues Bill's good fight. It relies on us to fund this important work. Please make a donation if you can.

Also, Happy Belated Birthday to Kunstler Fund director, Randy Credico, 58 years young on July 5!
***
And so in the best tradition of Counselor Kunstler, let's see what's on the docket...

Twain is one of my idols. And if America were a literate enough place that even a fraction of its citizens had read even a portion of his works, it would certainly be a finer country than it is today.

And that's why I can appreciate the extraordinary challenges faced by a genuinely intelligent and well-read gentleman like Barack Obama, who has read Twain, and understands as you do that the current level of our public discourse is neither intelligent nor literate. Which is why I give him a big pass on the patriotism issue, and wish you could as well.

I think Allan's comment merits an answer here on the center stage of this blog. Here goes:

Allan, Your statement is built on a false premise. Of course "a fraction of Americans" have read at least "a portion of his works." I am among a measurable number who have read a lot of Mark Twain's efforts. (No one has read them all -- his letters are still not completely available.)

If Obama had even a working grasp of Twain's views on such matters then he knows it was a cynical act to wheel out the great author's corpse to co-sign his patriotic petition. There are thousands of revered Americans who never uttered a word about patriotism that wasn't reverential. Why not employ one of them for this sordid duty?

Because Twain truly is my idol, no one will ever convince me to hide my motives behind a flag. This doesn't mean I won't vote for your candidate. It only means that Mr. Obama makes voting for him somewhat distasteful now that I have seen him misappropriate Twain for such petty duty.

Sorry I can't grant your wish about overlooking this matter. Never fear, my adherence to Twain's principles will have no real influence on the outcome of the election. An immeasurable portion of Americans read what I have to say. That's what makes them so very special!

OK, I'm working on an essay that's taking some time -- maybe it will be done tomorrow, maybe Wednesday. Also, there are some amazing developments in the struggle between the liberated forces of The Field and a certain authority figure at a failing rural organization. I am watching carefully and will comment when appropriate.

In the meantime, thanks to all who linked to and to all who read my Call Me Lucky post. The response (both public and private) has continued to be amazing. And yet I still know I will have no real influence on the outcome of the fall election!

***
UPDATE: Allan has replied below. Please take a look before reading the following:

Allan, I did read the speech. I also saw and read what most Americans knew of it-- the boiled down version that ended up broadcast on the networks and picked up by the wire services, which is to say, the soundbites the campaign wanted out there and got out there. They included Twain, front and center. Thus my focus. No false premises whatsoever.

Campaigns know what the money quotes are and they know how to underline them. They know what the media will pick up and so we got Independence, Mark Twain and don't you dare question my patriotism! The media wasn't mistreating Obama by including this version in its stories, it was playing right into his hands -- and those of his handlers.

Any political speechwriter worth his or her salt writes an entire speech as nothing more than a conveyance for the "money quote." A quote meant to sway the great mass of people who do in fact read very little and rarely watch entire speeches. The money quotes aren't crafted for those who read or carefully monitor public addresses. And even those who do watch the entire speech will get it boiled down for them so many times after it's done that the money quotes end up being what they remember of it.

A smart campaign builds plenty of escape hatches into a speech like this. The campaign's intent is for everyone to end up seeing what they want them to see. As the senator asserts in The Audacity of Hope,  "I serve as a blank screen on which people of vastly different political stripes project their own views." You saw a brilliant speech. I saw red when Twain was dragged into it. I was in an extreme and disposable minority. I further hated the how the speech was used for reinforcement of the myth about how the peace movement mistreated Vietnam vets, and would have mentioned this as well but my friend Dennis Perrin beat me to the punch, and it was a haymaker.

His recent speech honoring the Vaterland featured not only the predictable soft-focus images, but also the requisite "stabbed-in-the-back" refrain concerning the Vietnam era:

"[S]ome of those in the so-called counter-culture of the Sixties reacted not merely by criticizing particular government policies, but by attacking the symbols, and in extreme cases, the very idea, of America itself - by burning flags; by blaming America for all that was wrong with the world; and perhaps most tragically, by failing to honor those veterans coming home from Vietnam, something that remains a national shame to this day."

Tomorrow may belong to Obama, but here he's simply spouting crap. "Dragnet" hippies are always fun to blast, those legions of dirty, pot-smoking traitors who lined up at airports, poised to spit on any pour soul in uniform. Yet the reality is much different, as Obama probably knows. The antiwar movement of the 60s and early-70s embraced returning veterans, many of whom became prominent speakers and activists in the cause. It was the US government that shit all over combat vets, from the VA on down; and there was hostility in the military itself, among active duty personnel and the old coots at the local VFW.

Dennis doesn't have comments section on his site but I think that's probably best for you, Allan. In any case, I suggest you read his entire post. Never fear, John McCain gets his, too.

Anyway ,back to Twain and Obama. In this speech Obama presented himself to the chumps, as Red, White and Blue, as American as Independence Mo. and Disneytraumatized as Mark Twain. And then there was the bonus stuff for the thoughtful readers that asserted dissent is fine. I objected to the use of Twain, particularly when he excised the crucial word "rational" from the quote. Because to describe "rational patriotism" is to insult patriotism in all of its other forms, which was what Twain always did. It was not Barack Obama's intent to insult any form of patriotism in this speech.

The upshot of your earlier comment was that you wanted me to give a "pass" to Obama. Passes expire so I assume the Illinois senator will be expected to report for accountability after the election. Well, Martin Luther King has been dead for forty years. Shall we wait until after the election to point out that  Obama's brief recap of MLK's contribution to America provides a great example of how contemporary message massagers can destroy contexts at will with the best of the Fox news crew? The last clause of Obama's reference to King reads "who led a movement to help America confront our tragic history of racial injustice and live up to the meaning of our creed- he was a patriot." This is context demolition par excellence. Consider that "the young preacher from Georgia" spent the last year of his life naming America as the greatest purveyor of violence of all the nations on the planet. Period. For this he was practically excommunicated from respectable civil rights circles and roundly condemned by Democrats and 'progressive' clergy alike. Until the day he was brutally murdered, these folks criticized MLK for his excess candor and inability to pull punches. (And to be clear, nobody is criticizing Barack Obama for not being a prophet like MLK.)

Just like Twain, now that MLK's dead, his message is easily managed and repackaged to support even the most banal of political assertions and ambitions. And so now it sure was a tragedy the Reverend King had to leave us so soon, especially considering his great patriotism and all. So, 40 years after MLK was killed for refusing to hide his light under a bushel, we hear only the dry rustle of straw men carefully shucking off the poorly baled loads of cautiously pre-arranged words with which they have been stuffed to the point of silliness. It's implied that every one of us would have stood shoulder to shoulder with Martin all the way to the bullet chorus, but you know, we really ought not ever mention what he actually said or did back then. But keep the faith, folks, come the day after the election, quiet as it's kept... sense, meaning, truth, and even revelation will be just around the corner. Honest.

PS- Please try keep your reply to a reasonable length, say 250 words, or post it elsewhere (perhaps your blog?) and provide a link here. The layout of my comments section gets overwhelmed by giant tombstones of text. It's why I usually break up my posts in this main section with graphics. It's also why I have replied  to you in this area.

UPDATE 2: You know what, post whatever you want, Allan. But I think I will put some sort of limit on future replies with the reminder that I will be happy to allow links to further comments so long as they aren't to Klan sites or other worthlessly stupid destinations.