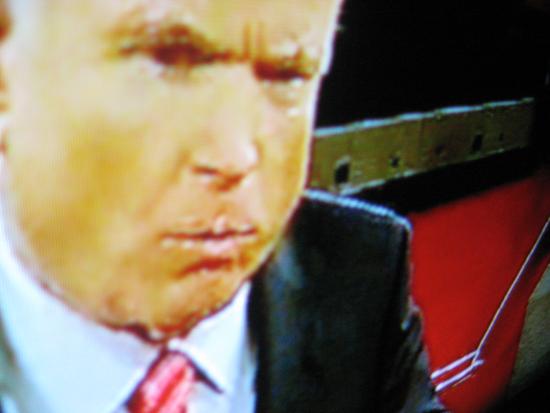 "I don't know what the unexpected will be." -- John McCain

On a night when John McCain had to make a game-changing effort, he looked more like a person in need of a diaper change. This could explain why he spent the presidential debate in Nashville shuffling around the stage like a thorazine-dosed patient on the ward of the state mental institution of Cuckoo's Nest notoriety.

I half-expected him to start blurting out "I'm tired" while Barack Obama spoke.

All night McCain doddered around the background like a confused old man who had lost something. Unfortunately by the time he stood up to check his pockets, he forgot what he was looking for so he just stood there, befuddled. Then a new problem developed -- he couldn't remember whether he had been just sitting down or just standing up and so he would shamble off for yet another lap around the backdrop. This effectively distracted people from Barack Obama but each time you remembered the Illinois senator was there, you were glad of it because it meant that the nutty codger in the shiny black suit wasn't likely to asked to take the, uh, tiller of state (providing of course swiftboating and the inevitable last minute denunciation of John McCain by noted reverse psychologist and recording artist Osama bin Laden don't work in concert to somehow re-energize the dimwit base.)

What little substance there was in this debate was vastly overshadowed by McCain's Oscar-winning performance as the loopy old-timer. When he wasn't wandering in and out of the picture, he was interrupting the proceedings with fetid attempts at humor. The crowd had been admonished against audible responses to the candidates but if someone says something funny, people can't help but laugh. McCain tried again and again to be humorous, each time pinching an even larger loaf into the punchbowl. The audience never was in danger of breaking its vow of silence. From attempted lines about hair transplants to a needless slap-down of his crony, Tom Brokaw, to a cornball "thank you" that caused him to lean into an Obama haymaker about Iraq, the Hoarse Whisperer was consistently impertinent and unfunny.

McCain's was so needlessly in-frame so often that it would have seemed absolutely normal if he began waving at the camera while mouthing "Hi Mom!" Things got no better when it was McCain's turn to speak. Twice he dehumanized Obama. Once he called him "that one," another time he pointed at Obama and said "This is the most liberal, big-spending record in the United States Senate." His objectification of his opponent came while speaking of an African-American in a southern state. Nice touch, Gramps. Voters with instant response dials reacted to McCain with such vertiginous plunges into disapproval that at one point CNN had to assure viewers that the Republican nominee hadn't provoked a mass suicide. By the end of the evening not even the markets crashing, the pain among the common folk or the failed military adventures seemed that important. All anyone cared about was being spared of another moment of watching a hollowed out ghoul meander any further as he reached ever deeper into the past for yet another cliched assurance that he had the secret answers to all of our problems, because, you see, he believes in service to America.

When the debate finally ended, Barack Obama stayed and chatted with the audience for almost an hour. In keeping with his "country first" theme, the tense, jumpy McCain left quickly, sparing the American people any further strain at the end of a very stressful evening. Trail droppings... Just a quick shout out to all the religious reactionaries who decided to come to my site to read what I had to say about Sarah Palin yesterday, with special thanks to all those who wrote me privately to express their Christ-inspired hatred of me.

I remind all of them that even though I know the unfortunate American soldiers in Iraq aren't fighting for my freedom, it  does not mean I hate them. They are just pawns in a game that's being played for the profit of greedy scum. I'm sorry that I cannot add false adulation and insincere thanks to help make up for all they have been put through. I can offer them compassion and suggest that they join the wonderful group Iraq Vets Against the War where they will receive the kind of support and understanding that combat vets must have.

By the way... I guess Palin really is the secret weapon seeing how McCain seems to have forgotten her name.