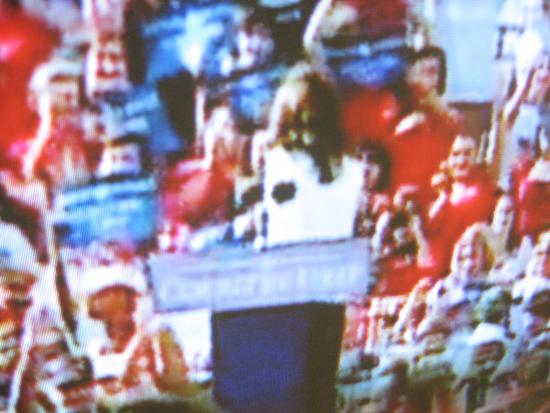 Things are too grim for us to spend much time on the ham-handed attempts by John McCain, his medicine cabinet-rifling wife and his braying running mate to fear monger us out of electing Barack Obama. Frustrated by the growing likelihood that they can't beat Obama at the polls, the McCain posse has put a new twist on the term "go down swinging" by verbally lynching the Democratic nominee at Republican rallies. Normally such deplorable behavior late in a presidential campaign would draw my full focus and ire. God knows I'd enjoy chronicling the political demise of a comedic team made up of the dim demagogue from Arizona and Alaska Governor Josephine McCarthy. Unfortunately, with a worldwide depression looming, I'm needed for other duties. The planetary economy is collapsing and no one in this country is so much as suggesting that we follow the economic demise to its source: the USA's desperate use of force to maintain its failing empire (shall we count the historical precedents in Roman numerals?) Beyond that, no one is getting to the heart of the immediate matter here in the United States-- if we are going to print money to help people, we shouldn't be doing it to guarantee the maintenance of some obscenely excess wealth of a very narrow slice (one percent) of our society.  Twinkling in the midst of this horror is the last faint hope of the McCain campaign because as the bottom falls out, people will grow more desperate and angry and crazy politicians screaming for vengeance will offer the kind of irrational leadership rabid lemmings demand. Believe me, the participants at McCain's rallies are already foaming at the mouth and ready to crusade -- check the maniac on the street interviews outside a recent Ohio event spotted by Tom Duffy at The Garlic.

According to economist Michael Hudson speaking on KPFA's indispensable Guns and Butter the Paulson/Bush/Pelosi plan isn't a socialist bailout, it's a fascist bailout. When combined with talk that martial law will be unleashed at the first sign of mob disapproval, and considering how depression's create mobs by putting the main ingredient for them (people) out on the street, Hudson's admonitions become that much more ominous. When people put it together that Fiscal Emperor Paulson's grift will make all the elite's bad debts good while still permitting the moneyed few to repossess our homes and foreclose on small businesses at a record pace, unrest among the unwashed will skyrocket. The powerful know this thus the contingency plans to use the military to impose mobster rule upon the dispossessed multitude.

If McCain can talk his way back into the race by using faux populist rhetoric to con us small folk into believing that he is the only hope, we will be in deeper shit than ever. Whispering Johnny would be an awful president but he has the true makings of a garden variety military governor. Let's hope the supposedly brilliant Barack Obama is prepared for this and will step up with some preemptive populism of his own. He needn't spell everything out, he just has to assure us that as things get rougher, he won't deploy the military to defend the perimeters of gated communities and he certainly won't use it to assault huddled masses. If elected, President Obama will have to have a Renewed Deal ready for roll-out. He will need to decree that we will only print money to help create jobs, buttress small businesses, repair our infrastructure, protect the environment, provide a mind-opening education for our children and make sure the human rights of shelter, good nutrition and proper health care are available for every American. He will need to make it clear that we can only develop a plan to save ourselves if we overcome our addiction to foreign wars. It means that he will have to sell Americans on the idea that pounding our swords into plowshares will benefit our economy, the environment and the rest of the world. Of course this means he will have to know all of this in the first place. Does he? I don't know. Will he ever acknowledge our screaming need for economic triage? He will if enough of us raise our voices to demand that our nation stop wasting its resources to destroy lives when there are so many people already fighting to survive at home and abroad.