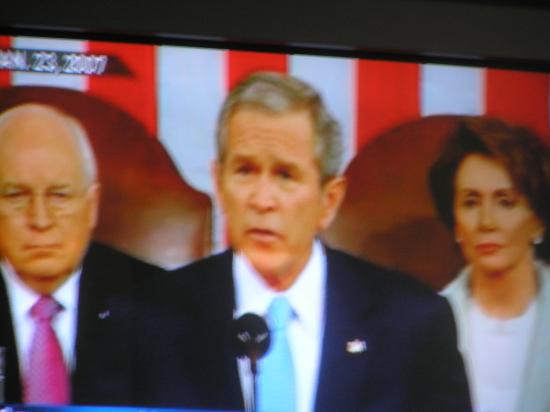 Now that John McCain has Barack Obama "right where he wants him" in state after state after state, it seems likely that (voter suppression and ballot-rigging permitting) the Party of the Pachyderm is about to receive an elephantine thrashing on Nov 4.

It couldn't happen to a slimier group of curs. The (voter suppression and ballot-rigging permitting) humiliation will be delivered by Democrats who have meekly stood by as Republicans have force-fed us war, oppression and the privatization of the Treasury -- and this was when the Donkeys weren't out and out collaborating on these massive misdeeds. The windfall (voter suppression and ballot-rigging permitting) win for the undeserving D's will mitigate the joy many of us will feel three weeks from tonight when the election returns reveal the extent to which John and Jane Q. Citizen long to hold someone accountable for the disaster that has been Bush/Cheney America.

Wouldn't it be nice if there were a way to remind the Democrats that we the people have not overlooked their culpability in this sorry web of woe? Wouldn't it be nicer if we could do it without somehow rewarding the always more evil Republicans? Wouldn't it be nice if we could somehow help take down a Democratic Party leader and replace that leader with a candidate who has arisen from devastation caused by the two political parties? And wouldn't it be even more amazing if that candidate had come to our attention when she regained her footing and then gave George W. Bush a shove down the oil-slickened slope from which he once taunted us?

Wouldn't it be fantastic if the Dem who gets handed walking papers was the one who, speaking from a position of high authority, promised that any chance of impeaching the criminally barbarous Bush was "off the table" immediately after 2006 Congressional elections that were all about public disdain for Bush? From there that person went on stand down as our liberties were being assailed at home and as our addiction to foreign wars continued apace abroad. Then this millionaire helped spearhead a gargantuan bailout of people already awash in more cash than any of us could ever imagine. No question about it, it would be tremendous if she found herself out on a street full of Republicans on the morning of Nov 5.

As you must know by now, the candidate who arose from her politically provoked devastation is Cindy Sheehan. She lost her son Casey Sheehan who needlessly  died in Iraq for a "noble cause" the coward George W. Bush has yet to articulate. Cindy is running for Congress against (you guessed it) Democratic Speaker of the House Nancy Pelosi. Imagine how great November 4 will be (voter suppression and ballot-rigging permitting) if we seriously repudiate the R's and then knock off the Vichy Dem who so compromised the electoral gains of 2006 by replacing her with the legendary woman who wiped the smirk off W's face?

Cindy Sheehan stands for what I believe in-- peace and justice. She has shown she will stand up to the most powerful people in the world. She is as courageous as she is compassionate. Cindy puts what matters on the table and no amount of political expediency can make her whisk it away. Cindy knows that we will only turn our country around when we turn our our troops around and then march them back home. Cindy supports mass transit instead of mass murder. She supports workers and their right to organize. She is an advocate of single-payer national health care -- the only civilized solution to this nation's perpetual medical emergency.

On the current financial mess, the Cindy for Congress website offers this:


Our economy is in turmoil. For decades, Wall Street and Washington have worked hand in hand to look after their own interests, with corporate fat cats enriching themselves with little to no regulation. Meanwhile, ordinary Americans are saddled with debt—from student loans, to credit card bills, to unmanageable mortgages—and unemployment is on the rise. Only now are we beginning to come to terms with the extent of the crisis.

To make matters worse, most of our federal budget is being consumed by a poorly planned and poorly executed war—a war we shouldn't have started in the first place.

Little is being invested in our country's basic infrastructure. Our bridges and levees are failing. Students attend crumbling schools, and our roads are riddled with potholes.

Right now, our leaders in D.C. are rushing to bail out the corporate interests with a so-called rescue plan that will cost tax-payers billions of dollars. Instead of rubber-stamping another poorly planned and executed proposal by the Bush Administration, I call for a comprehensive "bottom up" plan that gets to the heart of the economic crisis and addresses the needs of everyday Americans. The plan must:


Finally, the deregulation of airlines, telecommunications, media, energy, banking, insurance and other industries has created a dangerous and unhealthy environment. I call for greater oversight and regulation of these industries.

Imagine a candidate telling that much truth and actually getting elected! It could happen if every progressive American who too often uses one hand to vote while pinching her or his nose shut with the other, makes a generous contribution to Cindy Sheehan's independent campaign for Congress. Normally there would be no chance for anyone to defeat the Speaker of the House in a general election but this speaker has moved further and further away from the people of her district. Matter of fact respect for peace and freedom are what San Francisco is all about. It is a tolerant and progressive city and Cindy Sheehan would represent it well in Congress and way better than Nancy Pelosi ever has. If elected, Cindy would be a constant reminder to Democrats that they could be next unless  they start representing the people rather than the fat cats who keep them as House pets. This improbable victory for the little folks can really happen if we immediately buoy Cindy's campaign with contributions and give her the chance to make it clear to voters that she is running because she will truly represents the principles of the people of her district.

Everyone who has enjoyed watching the littlest president's very public collapse owes Cindy Sheehan. Back in 2005 when she starred in How I Ruined George W. Bush's Summer Vacation our feckless leader looked like he might escape with his thin political skin. Look at him now and remember how Cindy stood up to his impervious imperiousness. You think she can't do it again to another unresponsive leader? You think Nancy Pelosi isn't scared of her? It's no surprise that the woman who has been afraid to stand up to George W. Bush hasn't the courage to debate the woman who exposed W as a naked emperor. Pelosi's undemocratic cowardice is as predictable as it is pitiful. But the truth is, no one needs Nancy Pelosi. The Dems will have a huge legislative majority without her. The people of her former district will be represented by a more reliable and representative, uh, representative in Cindy Sheehan. Members of the D congress will think twice before taking out any petty revenge against the district that made an example of Pelosi because they will fear facing their own challenges from the left come reelection time.

Not only should Cindy Sheehan win but she really could if an influx of progressive support infuses her campaign right now. So get off your diverse buts San Francisco and get to work for Cindy Sheehan. And lefties around the country, it's time to cough up  whatever you can for Cindy Sheehan. Imagine if on election night (voter suppression and ballot-rigging permitting) the Republicans get trounced from coast to coast and then the last big story of the evening is Cindy Sheehan's upset win over Nancy Pelosi.

Best of all. imagine how George W. Bush will feel watching Cindy take office as he slinks off to face the harsh justice of history! That's too delicious a possibility to pass up just because we all didn't kick in what we could to elect Cindy Sheehan! So cough it up lefties and please spread the word!

So please spread this appeal to the millions of Americans who share Cindy's principles and priorities and please donate to her campaign now.

It includes links to an even bigger list of methods for spreading word of posts. (Digg, Twitter, Tecnorati, Google Bookmarks and many more) Please use your favorite(s) of these networking devices to  alert  those you feel might be amused, edified or annoyed by  this blog.

Also, if you befriend me on Facebook, you will usually receive word of my posts that way. I am even twittering a bit under the name "crimmins." So I'm trying to overcome my technical timidity  and I'd greatly appreciate your helping improve the already brisk traffic around here by helping get word of these words out.  I'd appreciate it even more of you'd send Cindy Sheehan a donation right away! And as ever, I am most grateful for the time and attention you so kindly direct to my efforts.
Thanks, BC