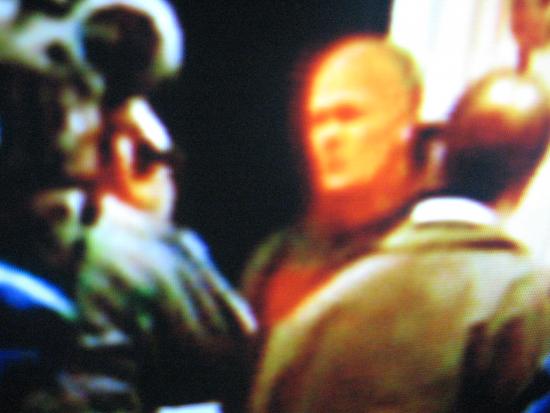 Like almost everyone else today, I come to you to speak of John McCain's Joe the Plumber (one Joe Wurzelbacher, an Ohio worker who asked Barack Obama about his tax plan.) During last night's presidential debate, "Joe the Plumber" was at the center of John McCain's last ditch argument to the American people. The reason McCain had Joe working overtime was because Obama's tax scheme is to slightly increase taxes on those who make $250,000 per annum (while reducing taxes on everyone else.) McCain says Obama is out to trample Joe (who owns no business as of the moment and obviously is a few mountain ranges away from Obama's tax increase threshold.)  So all we really saw last night was McCain using Joe as a human tax shield for the wealthy. The Arizona senator's premise that Joe would be hurt by the Obama plan is weaker than the Bud Light Cindy McCain peddles. For starters, almost no one with a new small business does well enough to pay him or herself anything near 250 grand in the first year. Even if Joe were to actually own a business  and somehow become instantly successful, unless he is an idiot, he would simply pay himself $249,999.99 per year and plow the rest of his profits back into tax exempt business expenses. That way he could improve and enlarge his new plumbing firm while avoiding the bigger income tax bill. If Joe is too cheap to hire a good accountant to explain this to him, chances are he is too stupid to clear a quarter of a million a year for himself. So no matter how you look at it, he's off the hook. Of course, were Joe the Plumber to somehow realize his pipe dream of making 250k, even if we subtracted the Obama tax increase, he would be incredibly better off than any of the actual plumbers he hires to remember for him that shit rolls downhill.

The real point remains that McCain, with his red-baiting and alarmist talk of "class warfare" and "redistribution of wealth," is actually advocating for enormously wealthy people like himself. He is speaking up for a minority that obviously likes being a minority because it rigs things to keep other citizens excluded from joining its lofty ranks. Last night the shameless and desperate candidate spoke of the coddled rich as if they're frail and vulnerable underdogs. To listen to McCain, you'd think the upper crust has no choice but to pay 24.99 percent vigorish on the credit card bills (hat tip, Joe Biden!) that working folks face when they purchase luxuries such as groceries and school clothes for their kids on the cuff.

When Whispering Johnny inveighs against redistribution of wealth, he's really just arguing for the further concentration of lucre among people who don't "spread money around" (as he promises Plumbing Joe will) -- unless you consider dividing a fortune between various off-shore banks to be a method of "spreading money around."

When McCain talks about the 35 percent tax rate on businesses in this country, as he did last night, he fails to acknowledge how many corporations operating in the USA pay NO TAXES AT ALL because unlike Joe the Toilet Tuner, the big boys have serious accountants and tax lawyers capable of driving a Brinks Truck through a pinhole. Grampa John's alleged pacifistic stand concerning class warfare is the biggest diversion of all because anyone who doesn't know a class war is already raging and taking a huge human toll, hasn't ventured beyond the gates of their estate to walk down the hill to where the sidewalks begin to crumble, the factories are closed and homeless people shuffle past repossessed dwellings. Instead of being buried with full military honors, the martyrs in this struggle are dumped in a Potter's Field of downsized, evicted, medically neglected, poorly educated, forgotten and ruined people. All of these folks ended up as most of them began -- poor -- a one-syllable word not even the supposedly erudite Barack Obama seems to have in his vocabulary. Like McCain's wealthy victims, the middle class have all the problems in Barack's world. The Democratic standard bearer never acknowledges that when middle class people lose their jobs and homes, they join the invisible ranks of the poor. His suggestion that the wealthy start paying a fairer share of the taxes is nonetheless welcome. If we tax the tiny minority of the rich, not even until it hurts but just until they at least notice it, then we might be able to avoid a day when the average person in this country is so poor that even politicians will have to begin speaking of the impoverished.

In the meantime, we're left with loopy old men like McCain telling us our children should be taught by soldiers who have been spared the cruel and unfair regulations that require people to get an education before becoming educators. Great idea, Johnny! While we're at it why not get dual use out of the locked ward at the VA hospital by also utilizing it as a daycare center? Implement the McCain plan and fragging will become the next big thing at our high schools. That this intellectually bereft jagoff wants to put boots on our playgrounds and have our kids indoctrinated by soldiers is no surprise, seeing how the only real chance for his candidacy is a brainwashed electorate. John McCain's concern for kids never makes it past the embryonic stage and his talk of the "sanctity of the unborn." When discussing abortion last night, neither candidate managed to mention that America's evil for-profit health rackets have caused our nation to fall to 29th in worldwide infant mortality.  How about  the sanctity of those babies' lives? Single-payer healthcare would save many of those infants but we can't have that! After all, if we socialize medicine, how could we possibly share the cost of the war machine?

In any case, Obama was light years ahead of his opponent by at least mentioning women in relation to the matter of reproductive rights. Speaking for Sarah Palin, McCain told us he's sick of hearing about women's health and its role in human reproduction. The ancient aviator has had enough of females who try to distract us from what's at stake if we take women's health choices out of the gnarled hands of wizened patriarchs. Sen McCain's comment about this matter could have him calling Joe the Plumber soon because this already slow-running John became completely stopped-up when he flushed his candidacy down the dumper by sneering at an oppressed majority of Americans -- women.