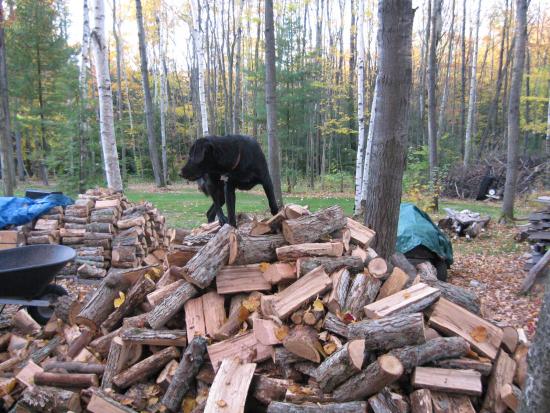 Lu on the lookout for deliveries and archers.
Below-- the device Apple sent
Below that -- Lettie, eyes glazed over from the long trip, back home.

Last Thursday the cord for my laptop became frayed to the point where it no longer delivered juice to the computer. I called Apple and established that it was under warranty. They promised to "overnight" me a new cord. None arrived on Friday. Or Saturday. I held no hope for Sunday and this annoyed me because I really wanted to write about the Billy Bragg concert that I attended in Ithaca the previous evening (if he comes anywhere near you, catch him on this tour -- he's at his most insightful, most hilarious and most soulful (RIP, Levi Stubbs) at a moment when we all need a booster shot of Braggy. Bostonians, he's at the birthplace of Billy's alter ego Johnny Clash, the Somerville Theater tonight (Tues 10-21 and tomorrow, as well>. He'll help you forget the Sox and give a non-cynical yet one-finger sendoff to the Bush-Cheney years. Billy's new release Mr. Love and Justice is tremendous and available from better music stores and online download sites everywhere. The rest of his tour dates are listed here.)

That (parenthetically) said, yesterday I expected the cord to arrive first thing. It didn't. I tracked it on DHL (Apple's delivery service> and all DHL's online tracker told me was that it acknowledged receipt of an overnight package last Thursday. I contacted a DHL rep through online chat. Ten minutes later I was promised my package by 5 PM.... Tuesday! When I pointed out that DHL offered no "overnight" service that delivered packages any time later than 3PM the next day, let alone five days later, the DHL rep responded by asking "Is there anything else I can help you with?" Translation: screw you, sucker!

I called Apple again and must say that it is no small task to use a phone while emitting steam from one's ears. I somehow managed. After first making it clear that the anger I was about to express was for Apple and not its hard luck rep (who thanked me and said he understood), I went through the entire affair in perfect detail. I then added that my displeasure was amplified because in recent years I'd bought two other Macs  and switched it out with one from a new package. I thanked him profusely and left.

On the way home Lettie and Lu and I stopped at a park that allows dogs but not bow hunters. They romped and rollicked and eventually did their business and we proceeded back to our mountaintop dwelling. I plugged the new cord into the computer and the surge protecter and after only four days, power to this person went right on.

Before any of you see this as some sort of opportunity to convert me to using Windows, please understand that although I will not hesitate using this space to express displeasure with corporations that do not behave in a fashion that belies respect for me as a long-time customer, I am not about to start the three-millionth "Microsoft blows" blog (something that would happen five minutes after I started using their weak-ass knock-off of the Mac interface). Macs let me think like I think, not in a fashion that conforms with how some computer geek demands me to think. When I hear "C-Drive" I think of driving along the coast of Maine and not of a death march through illogical directories. No Mac has ever told me I have done anything "illegal." I make the laws on my desktop. Macs let me stay on the side of my brain I use to be creative. Windows systems are lethal to my muse. Even after several hardware failures and incredibly inept recent service (and really, I have just hit a bad streak-- most Mac users have been unscathed during my recent spate of bad luck), I know I have been up and running much more than I would have been had I been using one of those Bill Gates virus-spreading devices. Nevertheless, Apple needs to do better, which is why I am sending a copy of this post to Apple officials via their feedback area on apple.com.

I promise to be back with a major statement on the election tomorrow, providing I maintain the powerful connection I'll need to post such remarks. UPDATE: Just as I went to post this my incredibly stable web server, it crashed. I lost all the graphics and captions for this post and so have to try again. This has been a really annoying week.