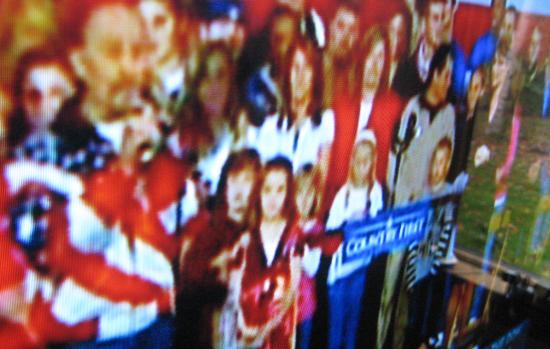 Lee Greenwood serenades the visage of Sarah Palin that miraculously appeared on (of all places!) a teleprompter.

Here's a review where we're at and in turn, where I stand with under two weeks left in Campaign 2008:

Traditional Republican appeals to ignorance, fearfulness, cowardice and bigotry are all that stand between the American people and the delivery of a good old-fashioned electoral stomping that will announce, at least for now, that the Gluttonous Old Party is over. Amen and Hallalujah to that!

Watching John McCain's campaign mesh Joe the Plumber with Joe the McCarthy is as infuriating as it is predictable. A party with the ethics of Lee Atwater playing to core supporters with the intellect of Lee Greenwood has no choice but to dive into the deep end of the cesspool to protect itself from further exposure as the nesting place of naked emperors. Attacking from below has worked well in the past for the R's but after eight years of disastrous dictating during which the Bush-Cheney crime crew has stolen everything that wasn't bolted down, particularly the future, too many people are hurting, too badly, to consider casting ballots in support of a winded old fart with nothing to offer but the ancient Republican spook stories we hear every other Halloween. And so the elephants speed their procession to their burial grounds with each odious attempt to wink and nod the American people into believing Barack Obama is an A-rab-terrorist-commie. You'd think people had finally realized that it's 2008 or something. Although he's packaged as a brave and steady military man, McCain has shown a propensity for responding to demanding circumstances with all the composure of a shocked third grade girl who just had a frog leap from her lunch box. One such panicked move was his selection of a running mate who has now established beyond any doubt that tundra can produce lint. After the American people vetted Sarah Palin for him, the initial polling bounce McCain received from his veep choice (that came from its unexpectedness and its direct appeal to the closed minds of ignoramuses in America's hinterlands) has disappeared into a chasm of disapproval. Complicating matters for McCain have been the complicated matters of domestic and international fiscal collapse that prompted him to first declare our economic status as "fundamentally sound" before suspending his campaign so he could rescue us. This led to a dismal, comical and very public failure that turned Whispering Johnny into a bigger and older joke than ever. He followed this up with dramatic announcements of plan after plan to resurrect our financial health -- schemes that have held up to scrutiny with Palin-like durability. Additionally, he's tried to lay the collapse of an immensely top-heavy economy at the feet of an opponent who has  dared to suggest that we at least consider helping the little guy every now and then. The Democrat has maintained his calm and spoken in body language that implies he is capable of sitting still long enough to face reality. In the meantime Sentaor McCain has made it clear that there is nothing reassuring about a wrinkly, white-haired guy demonstrating the breaststroke, while standing on dry land and dressed in a blazer and trousers --  especially when the wrinkly, white-haired guy hasn't bothered to mention that he's demonstrating the breaststroke.

Mix all this with three debate performances in which McCain blustered, scowled and even quite literally wandered away from the undecided voters to whom he had to appeal and that brings us to today, twelve days from the election and the R's with a candidate who is now sharing spotlight with Sarah the Swinehearted and the aforementioned meatheaded mega-dildo, Joe the Plumber. Cue the Three Stooges theme music and sit back and wait for the pies and seltzer to start flying.

You know that inevitable scene in WWII flicks where we see panic at the German High Command because the Allies are advancing from all directions? The war is all but over and the Nazis know they've lost. Jackbooted adjutants are hurling files into the roaring flames of giant fireplaces. Various Third Reich thugs are rushing up and down the grand staircase and swirling around one another as they carry out last-ditch orders. Cries of "Raus! Raus!" echo everywhere as high-ranking officers exchange dejected murmurs acknowledging that it is over and the only thing left do is bag up as much booty as possible, change into civilian clothes and begin the long trip to Argentina. I can't help but imagine a similar scene is taking place at the White House right this minute. The scam is up and everyone knows it. Panicked underlings are covering tracks, bulk-erasing hard drives and crating up loot. The saps who have been dispatched to the campaign trail to slow the cruel but accurate judgment of history are failing miserably. In fact nothing is working. Not fear-mongering. Not casting aspersions about the patriotism of political opponents. Not the rewarding corrupt bankers with a bonus of the Treasury for going broke by ripping us off. Not even traditional emotionally manipulative tripe is swaying anyone but members of the GOP's drooling base. We're sorry Nancy Reagan broke her pelvis and some of us even restrained ourselves from chuckling audibly when we heard Cheney had been brought in for another blast from Doc Frankenstein's jumper cables but decent instincts won't stop us from rising as one to clear the decks of almost thirty years of braying right-wing nincompoops. That the weak-kneed Democrats stand to gain everything from this colossal beat-down has many of us wondering how they will screw up this wet dream of a tidal wave -- but screw it, first we have us some vanquishing to do!

For once we have an Election Day to gleefully anticipate because it really looks like it will bring the humiliation and repudiation of a political party that has been a pox upon the populace for most of our lives. I don't care if my strident lefty friends (OK, my fellow strident lefty friends) never forgive me for going soft on Dems. I grew up in the oppressive clutch of Republicanism, escaped and have fought the GOP ever since. Along the way I learned better than to worship Democrats but if Barack Obama and his extremely well run campaign can deliver us from GOP evil, I am just going to have to take my chances on him and the candidates on his ticket. After all, who am I to scoff at the hope he has inspired in millions of people? Who am I to pass up the best chance we have had since 1964 to cold-cock these soulless fuckers? My plan is simple -- from now through the election I'm going to work very hard to defeat the party of McCarthy, Nixon, Kissinger, Reagan, Bush, Bush, Cheney, McCain and Palin. I humbly request that you do the same. As I write this a new Republican attack ad is blasting on CNN. It is attempting to dissuade us from supporting Obama by labeling him as a "chicken." The ad is replete with the mocking clucking that schoolyard bullies use in attempts to provoke needless conflict. Such childish chiding will end in just twelve days because dead ducks don't cluck.