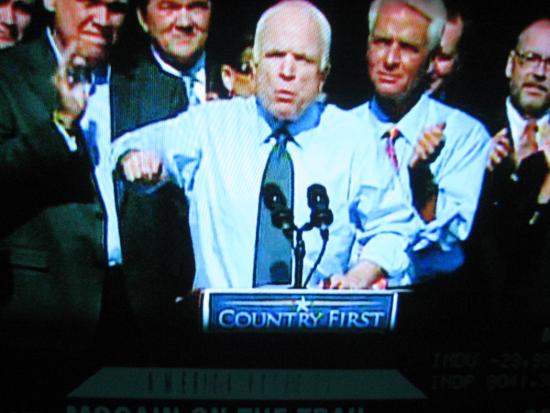 Toward the bland finale of these addresses, the fight-fight-fighter becomes the embodiment of every bad football coach who has ever tried to inspire a horrible team on to unexpected victory against a bowl-bound opponent. Watching this doomed candidate punctuate the flailing of his arms with zipless jabs at an iron-jawed opponent, you almost expect to hear him bellow, "But come Tuesday night, boys, they'll all know the name of the Squirming Eels of Slippery Elm State Teachers' College!" Oh yeah, Coach, they're crapping their pants over in the Penn State locker room.

Coach Catastrophe aka/John McCain has drilled, baby, drilled through generations of political muck and slime to hit a gusher of pure crude innuendo and character assassination that formed from the fossilized hatred and cowardice of the once and present pox upon the American nation known as McCarthyism. McCain red-baits Barack Obama with specious allegations concerning socialism (as if we actually had a pluralistic political system) by calling the Democrat a "Redistributionist" -- the fight-fight-fightingest of fight-fight-fighting words.

In coining such an impossibly non-catchy term, he regurgitates bile once puked upon this nation by some of the creepiest people to ever wrap fascist intent in red, white and blue camouflage. And so the inhuman remains of J. Edgar Hoover and Joseph McCarthy and their accompanying stench have joined Joe the Plumber, Tito the Builder and Sarah the Scammer on the stage at John the Slimer rallies that have become sort of a cross between Let's Make A Deal and The Ox Bow Incident. And that's just the main stage. The sideshow includes genuine paid McCain operatives reporting fictitious assaults by black-penised, Obama-supporting assailants hellbent on teaching virtuous fight-fight-fighters all about dyslexia -- or is it 'byslexia?' When this ends next week, gird yourself for McCain's next campaign -- the one to restore the myth that he is an "honorable man." The media will sign off and quickly get to work with the tarnish remover but if I have anything to say about it, the Arizonan will go down in history as a last gasp footnote to a generation of dominance by Gangland GOP. Defeated by George W. Bush in 2000 and done in by some crumb-bum Bush operatives in 2008, Whispering Johnny will be recalled as the pol who red-baited the red states blue while running as a reformer who expected us to believe he'd had no choice but to watch our country go down the tubes while seated helplessly in the front row of the United States Senate.

So let him have a few more days of caterwauling about "getting big government off our backs" as he represents the political party that has initiated a house-to-house search for unexpurgated copies of the Bill of Rights. Let him holler about the dangers of "spreading the wealth" to crowds  of people too stupid to realize that Republican bosses have long considered Pay Day to be a commie plot. This weekly victory for un-American elements (sometimes called 'workers') forces "risk-taking entrepreneurs" to give up a portion of their hard-earned obscene profits to the people who create the goods and perform the services that made the rich rich in the first place. And they said it couldn't happen here! McCain has only six days left to hope we'll wig out at his grim admonitions that if Barack Obama becomes president "the government will choose your doctor for you." This is as opposed to, one assumes, the unlimited medical choices currently provided by affordable and friendly HMO's. Left out of McCain's considerations are fifty million or so people who have no doctor at all and would love to have one assigned to them by anyone or anything at all.

A week from now we'll no longer have to watch this crumbling coach thrash madly in front of a chalkboard covered with X's and O's too numerous to do anything but obscure one another. This pooped pep-talker has tried every gimmick in the playbook only to be foiled again and again. He has gone from Hail Mary to Hail Satan as he's spiraled downward from his desperate lurch in choosing the abominable Alaskan to his bottom-feeding on Tailgunner Joe.

As one who could use a little redistribution of wealth and a lot of healthcare, McCain's rah-rah rabble-rousing is lost on me. It's lost on most Americans and if they get to the polls in the numbers currently being projected, it will be a long, long Election Night for the Squirming Eels of Slippery Elm State Teachers' College. NOTE: I had a horrible problem with my connection today which resulted in the brief posting of an unedited version of these remarks. Deepest apologies.