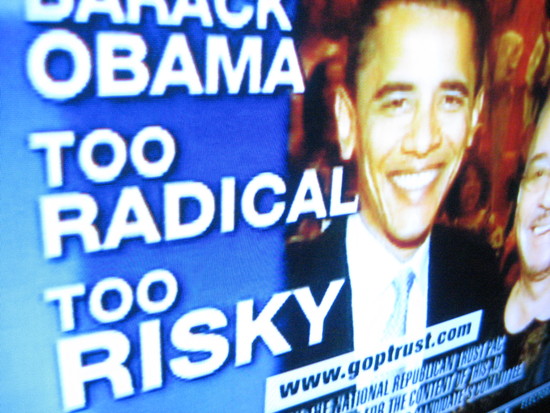 John McCain: Too stupid, too late!

NOTE: Please forgive the inevitable typos. I will be posting fast and furiously today...

I fell asleep with CNN on but was reawakened pretty quickly when the Rev. Wright attack ad with the bleeped out "God damn America" ran so many times that I mistook all the bleeping for an alarm clock. I woke up laughing at clowns so unable to hurdle over their own sanctimony that they blew a big chunk of their get-out-the-vote cash to pay to have the term "God damn America" put on a network tape-loop run so often that it became almost a mantra. They'd have been better off running a tape of McCain literally clutching at straws. Mac is back! Yeah, waaaay back. What idiots. The bottom line is that they've spent millions to drill the phrase "Goddamn America!" into our heads. This phrase is so unacceptable that we had to play it for you dozens of times to make sure you'd know to guard against having it run through your head even when you're not listening to it, like the hook from some awful pop song.

Best of all, kids all over the country are no doubt parroting "GOD DAMN, AMERICA!" Way to go, RNC! I could never afford to finance such wide-scale subversive activity.

The next thing I saw after the GOP 527 "Goddamn America" ad was McCain saying, "I have served this country since I was seventeen years old..."  which, although still groggy, I completed with "and you have the brain damage to prove it." My Election Day was underway.

Next CNN had some radio goofball from Richmond telling us that this thing is tightening up. It sure is.... in Indiana, Nebraska, Montana, Arizona, Alaska, North Dakota, Georgia.....

I took the dogs out but returned to see Joe Scarborough and Pat Buchanan on MSNBC seemingly preparing for a wake. I made a mental note to send Buchanan a mass card with McCain's picture on it. And on Imus was a really stupid cowboy hat -- but that's redundant, isn't it?

Back on MSNBC, Scarborough was fantasizing about McCain winning via a scenario that has something to do with the misguided liberal media, cross-country skiing and a surprise 14 state winning streak brought on because Obama underperformed in primaries that somehow led to his walking away with the Democratic nomination against the most vaunted political organization in the country. Buchanan was busy saying a rosary and didn't chime in much. Scarborough then added,  "Anyone who says there is a reverse Bradley effect is smoking crack." As opposed to whatever he fired up to come up with the previous scenario.

Scarborough, like most reactionaries, is stone deaf to the future. He doesn't understand that the bigots of the past are dying. There is no way to stop their disenfranchisement. The dead only voted in old jokes about Chicago. They have been replaced by generations of kids who grow up digging hip hop, attending integrated schools and who don't give a shit what people do in the privacy of their bedrooms. Their parents are as likely to be influenced by their kids as they were influenced by their own parents. In fact, large numbers of young adults' parents grew up taking the right side in struggles concerning civil rights, peace and the environment. And the kids grandparents have reached the stage of the game where many are more concerned with their healthcare, pensions and social security checks than they are with rationalizing attachments to past negative superstitions concerning fellow human beings. They are also the living links to the New Deal that now needs renewal. Try to effect that, Joe.

As the old order collapses, new choices must be made and what's Scarborough saying? There is no way Obama will succeed unless he kowtows to reactionaries. Even if he wins by a landslide, and has the longest coattails since LBJ, his only choice will be to appease the fuckers who just got wiped out by the voters. Scarborough is pushing hard to impose new and even stupider conventional wisdom upon us. But if the economy remains sincerely sour or things are even that much worse by January,it says here that Obama will be pragmatic enough to do what he has to do appease the American people. This could even include leading them to a better and more progressive place regardless of what dinosaurs are screeching about as they sink into the very tar-pits that provided them with the only thing they ever really had to offer. ****
After a bitBuchanan sparked up, chortling about watching the cops beat the shit out of kids in Chicago in '68 from a luxury suite in the Hilton, forcing me to turn off the TV before I fried this laptop by barfing on the keyboard.

As I drove down to vote, a radio ad for my local linthead congressman Randy Kuhl attempted to tell me that according to the non-partisan Heritage Foundation (!!!), Eric Massa (his D opponent) and Barack Obama would  raise working people's taxes a gruntload and cost upstate New York tens of thousands of jobs. Hey, Randy, we don't have tens of thousands of jobs to lose since all your cronies exported them but  I sincerely hope you lose your job today, you lying sack of shit.

I was the 29th person in my precinct in New York's 29th Congressional District to pull the lever and it wasn't yet 7:45 am. In the past I don't recall being later than the eleventh voter, even though I have arrived much later in the morning (and remember, this is an extremely rural area that's sparsely populated.) As I left I told the election workers that if enough people didn't show up, I'd be happy to come back to vote as many times as necessary if it would help make our precinct look better. The D lady election inspector laughed, the R lady chuckled nervously.

As I returned home the phone was ringing. It was John Joslin calling from Detroit. He said that he has never seen an Election Day that yielded the massive numbers of voters that are lining up in the "D" this morning. In one of the most despairing corners of the decaying Rust Belt, his neighbors were happily standing in long lines to make sure that they'd have their say. They were, in a word, jubilant and completely undaunted by the wait. JJ clearly sounded inspired, which is saying something for someone who has steadfastly fought the good and decent fight in one losing but noble cause after the next, in a city that has been ignored almost into oblivion. Hearing him enthuse about the turnout and the ((de facto holiday that had broken out was inspiring. Joslin is no paintywaist liberal. He has taken a million courageous stands and exactly zero bows. He has done more good deeds than the United way, Little Sisters of the Poor and Boy Scout of America combined. When he lights up over something that's taking place, there is good reason for it. By the way, the humble Joslin will never forgive me lauding him in this manner. So be it. I'm just happy to hear that in an election that seems to involve no one below the rank of middle class, poor people are taking some hope. To listen to the rhetoric you'd think we should be voting as if our riding mowers are at stake. By watching TV I know the scene JJ describes is not unique to Detroit. Here's hoping it leads to another holiday tomorrow.

As Grandma Crimmins would say, "On the the other hand, there's warts." I am currently watching Sarah Palin extol the virtues of her home in Alabama with snowmobiles, where she has returned to vote. May she find herself on the wrong side of an avalanche later this evening. More as developments warrant. Please feel free to post your Election Day experiences in the comments section. Get out and vote! Get out the vote!

UPDATE: Here is a timely essay from my buddy Nick Zaino at the Optimistic Curmudgeon. He dredged up some remarks I made to him last year or something that I needed to remember.He uses them as a jumping off point for  fine essay. Thanks, Nick!