To the person lurking in darkness Sunday, November 16, 2008 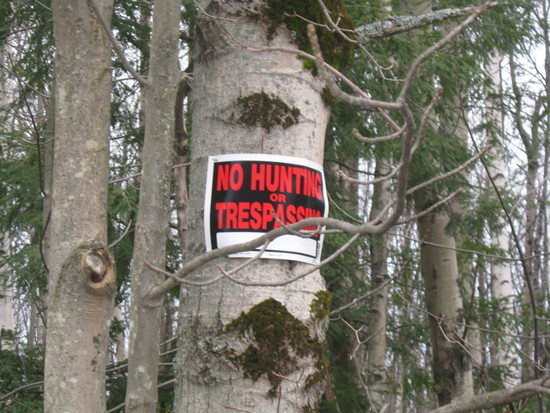 You may be fretting over which obscenely wealthy person Barack Obama will name to represent us to a world full of paupers but I have other people to worry about.

They're everywhere, including and especially at the borders of the private property upon which our modest home stands. Even though there are thousands of acres of state land around here where autumnal war games are encouraged, certain miscreants are attracted to this property by the world's greatest shithead magnets -- signs that say "NO TRESPASSING OR HUNTING." This insults and challenges these folks-- who have no choice but to take to the field to put meat on the table because they blew the next several years' of grocery money on ATV's, trailers, weapons, ordnance and more camouflage than General Patton and the troops he commanded utilized as they battled from North Africa to Germany. Rather than consider that 'posted' signs as necessities for the safety of those who choose to live on this land even when it isn't doubling as a killing floor, the turfy interlopers behave like children mocking orders to remain in their own yard by sticking a toe or two onto a neighbor's lawn. These people (and yes, I know there are also 'good' hunters) don't give a wit (or even half of one) for anyone else's peace of mind. The only safety that matters to them is represented by a one-color rainbow of hunter's orange attire.

Taking advantage of a loophole for non-murderous activities created by the un-American, anti-sportsmen lobby that criminalized the discharge of high-powered rifles from sundown to sunup, Lettie, Lu and I were on a Saturday predawn ramble when the girls detected something creepy, lurking just at the edge of our property. Even before the sun had risen on the first day of "gun season" for deer in New York's southern zone for hunting, blunderbuss-toting nincompoops were already surrounding the remote outpost we call home. The dogs stayed on our side of the line as they barked loud reports of the incursion.

From the darkness, a human woodchuck yipped back at me and my good girls. "Ya better do sumpin' about dem dawgs!"

Over L&L's now greatly amplified woofing, I responded, "Don't worry, I will. They deserve a reward for alerting me to the presence of intruders at the edge of this property. It's a job they do every day. Most of the time they just drive off deer, which is why you will never find what you're looking for here."

Without warning, I opened fire with a weapon of my own, a million watt flashlight. I panned it back and forth across the forest. This device routs the moronic marauder on several fronts. First, it announces the presence of humans to local wildlife. Next, it makes the hunter feel like the game and the hunter hates that. Finally, it attracts game wardens because the presence of such a bright light is a sure indication of poaching. If a ranger is nearby, he or she will demand that anyone with a gun in close proximity of such illumination furnish proof that they are licensed and law-abiding hunters. This is often not the case in these here parts. Either way, none of them like contact with the woodland authority any more than the rest us enjoy routine traffic stops. Although bright enough to announce the opening of a major motion picture, my light missed its mark but nevertheless did its job. As I heard the hybrid Hatfield/Fudd stagger away through the darkness, I offered a brief prayer.

"Please great and lucky superstition upon which we, the sorely beset, have no choice but to turn to in our helplessness, let the goober's safety on his gun be off so that he might become a small story on the wire services tomorrow."

This particular petition was neglected by the up-yonder role-caller. When the girls and I got back to the house, I plugged my weapon back into its charger, right next to its bigger 1.5 million watt comrade that is also at-the-ready at all times during these dangerous days. Then I took a moment to smile about the encounter and the terrible rainy weather outside.

It kept up all day, coming down in such torrents that not even state of the art camo rain gear could best it in the open field. So the hunters were drenched to the bone yesterday before the weather changed last night and the temperatures fell to freezing. I was happy about this until about 9 pm Saturday when I drove down to town to pick up some supplies to see us through the siege. About halfway down the hill my headlights illuminated what looked to be a large dog. I slowed down and crept forward until I identified a fawn, and a pretty young one at that. It stood and looked back at me, lost and scared. This fresh orphan, facing hills full of coyotes and a first-ever long, cold night without a mother's warmth, would have been better off had I just sped up and ended its misery. I couldn't do that any more than I could shoot the poor thing or eat the flesh of an animal. I haven't the heart. (And I do understand that he herd needs to be culled but do you understand that the deer herd is enlarged by state wildlife agencies that do everything possible to make the countryside ideal for the animals that generate the most income from hunting licenses and for private, very influential businesses? They promote deer overpopulation to justify an annual onslaught of armed, beer-swilling mutants in my neighborhood. And it sucks.)

As I looked at the helpless babe at woods' edge, I felt as if the universe collapsed on my soul. It could only understand it felt confusion, grief and fear. I, on the other hand, knew exactly how awful things were for this little one. I was again left to the remedy of the sorely beset. This time I chose my deity more carefully since the prayer about to be offered was serious and for another. So I asked the great pacifist and lover of animals, St. Francis of Assisi, for mercy for the foundling fawn, who scooted away after looking me in the eye with eyes that sought explanations for the inexplicable.

If the poor deer made it through the night, perhaps thanks to the protection of a surrogate mother, what peace it found is now over. The goatfuckers are again afoot, ready, willing and able to massacre any creature old enough to provide safety and guidance to the young and terrified fawn because, after all, these people have kids to feed.

UPDATE: I went out to get some photos for this and was reminded that laws mean nothing to many of these people. They park illegally, they camp illegally and when some do act legally, they do so only to aggressively exclude other hunters from their turf. I guess they know better than to be out there with people like themselves. Idiots who only have permission to hunt on an adjacent property have now added the threat that they are 'patrolling' it to some of their 'posted' signs. How very paramilitary! So an out of town landowner who is kind enough to allow these lower-case McVeighs to hunt on his property now has militia-type meatheads putting up signage that will undoubtedly irritate other armed morons. Will this lead to firefights and king hell lawsuits? Stay tuned and I'll let you know because this is right across the street from my home. Makes me wanna holla and I do. In fact I just came in from screaming at a moron who was carrying a gun on the edge of my property well past sundown. It's DARK, you idiot, GO AWAY!

The rest of the day was spent watching a parade of vehicles creep past our home so nitwits could check to see if their were any deer to shoot on our front lawn or maybe to see if there are any gutted carcasses hanging in front of our home. Since they have no manners, I don't bother to tell these clowns that it's impolite to stare. Instead, I simply wave at them with a portion of my hand.

NOTE: Speaking of hands, I am battling some serious arthritis and so typing is tough. I will resume posting more frequently when my digits become a bit less gnarled.