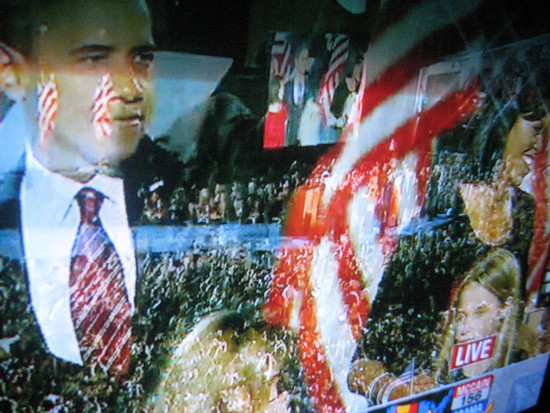 Anyone who says there is a reverse Bradley effect is smoking crack. -- Joe Scarborough

Please place your hand on the bag--  The first thing Chief Justice Roberts will say to President-elect Obama before administering the oath of office. Thanks to a new generation of voters, our country finally grew up by getting younger. Here's looking at you, kids!

There will be plenty of time for postmortems and some lovely people upon whom to perform them but this morning I want to single out an individual who has been overlooked for his contribution to last night's thumping victory for Barack Obama. I speak of course of Lou Dobbs. Without Dobbs, who knows if Obama would have won a reported two-thirds of the Latino vote?  With that vote came Florida, Colorado, Nevada, New Mexico and an expanded victory in California.***

Without Fr. Coughlin of Cable's xenophobic rabble-rousing, the Republican Party would have never imposed an anti-immigrant litmus test upon any serious candidate for the GOP nomination (such hatred would have been an a la carte option found on most pachyderm plates anyway but Dobbs made it mandatory and it killed McCain). Absent Dobbs (and he soon might be if CNN execs know a dead political fad when they see one) there would have been no chance of returning American politics to its more complicated roots, when everything wasn't color-coded, except for Reds, who should have known better than to be in Alabama anyway.

So a big shout out to Lou "Communist Chinese Earthquake" Dobbs. You can go now. I never watch FOX-News because I grew up in a reactionary world and I know its dogma, arguments and impatient ignorance well enough without inviting it into my living room. But who could pass up Murdoch's mouthpieces last night?

I tuned in as they were trying to pretend that McCain's hopes of winning Pennsylvania hadn't been dashed 20 minutes earlier when the whole world called the Keystone State for Obama. This being a newsroom on an election night, people should have been running around, papers should have been rustling, phones should have been ringing. Instead what we saw and heard was an environment so sterile that you'd think they'd snuck a camera into a microchip manufacturing facility. No one seemed to be breathing, or even moving. The on-air talent was not chiming in as others spoke. Instead they sat silently and perfectly still as if any motion at all would draw attention and fire. As Michael Barone attempted to explain why it wasn't prudent to give Obama Pensylvania just yet in case court challenges to the Fifteenth Amendment succeed and negates the African-American vote. The people behind him --producers, researchers and interns -- sat stillest of all. These folks were in front of computer screens, but careful examination established that nary a one of them could summon the courage required to look at the information that was in front of them. A few of the underlings were twisted away from their monitors as well as holding up a hand to shield their eyes from any possible exposure at all to the deadly truths that were being revealed. A political Vesuvius had erupted and these poor devils were doomed to be trapped in Tivo time, forever frozen in the moment when their political world was wiped out. Had anyone coughed every piece of glass in the studio would have shattered.

Speaking of glass in studios-- Wolf Blitzer is holding a post-election Situation Room Flat Screen Blowout. All 319 monitors must go! Just don't tell Dobbs where they were manufactured. OK, I may need a few days. I have come down with some sort of bronchial complaint, which is why it took me all day to get this meager post up on the site.